Lauren Bernard was in seventh grade when she first volunteered at a community kitchen in downtown Kansas City. Bernard returned every Saturday thereafter to help at the kitchen, which served 500 homeless people each day. 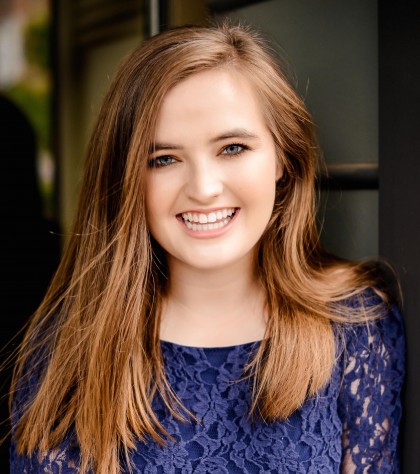 Later that year, Bernard's mom signed her up for a summer of service with the Youth Volunteer Corps of Greater Kansas City, an affiliate of a national non-profit with a mission to introduce, encourage, and support the spirit of volunteerism in youth. After completing that first summer experience, Bernard returned to volunteer with the corps until 10th grade.

Inspired by a passion for service, it was in 11th grade at The Barstow School that Bernard co-founded Leo, a youth arm of Lions Clubs International.

Bernard, now a first-year student at Johns Hopkins University, has been named the 2016 Young Fundraiser/Philanthropist of the Year by the Association of Fundraising Professionals MO, Mid-American Chapter after receiving a nomination from her high school.

Bernard encouraged 500 students to write letter to veterans, adopted a Honduran classroom, and created partnerships with other non-profits and student organizations while serving as the Barstow School Leo Club president. She also spearheaded an annual club fundraiser for Foundation Fighting Blindness.

"She is an inspirational young woman who has made a huge impact in the Kansas City community, and it sounds like she is already doing the same for the Baltimore community during her first semester at Johns Hopkins University," said Micaela Vaccaro, a marketing AmeriCorps VISTA for Youth Volunteer Corps.

"[Lauren] is energetic and hard-working, and the world is a brighter place because of the impact she has made."
Micaela Vaccaro, Youth Volunteer Corps

Since becoming a Blue Jay, Bernard has participated in the university's alternative breaks and pre-orientation trips, and joined JHU's Lions Club—Visionaries—and the Alpha Phi Omega International Service Fraternity. She said that participating in local service has shaped her perception of Baltimore as well as her role within the city.

"I can't see being a student in Baltimore without being a citizen in Baltimore," Bernard said. "The city very recently has had some poignant social justice issues arise in events like the 2015 uprising. I am interested in how these events and their responses reflect a communal interest in making Baltimore voices heard."

And Bernard's servant leadership has stretched beyond the city limits.

She serves as a Leo Club program advisory panelist for Lions Clubs International, where she represents the U.S., Bermuda, and the Bahamas as one of 26 panelists working to better Leo Clubs across the world. In this position, Bernard consults on potential marketing strategies, programming, online data reporting, and preparation for the organization's centennial year.

"She is energetic and hard-working, and the world is a brighter place because of the impact she has made," Vaccaro said.

Despite the demands of her involvement on campus and beyond, Bernard returns to the community kitchen in Kansas City every year—the place where she first began to volunteer.

"Civic engagement is the only passion I am certain I will carry into my future," Bernard said. "I'm undecided what career path I would like to pursue, but I know I want to serve in whatever capacity I can."