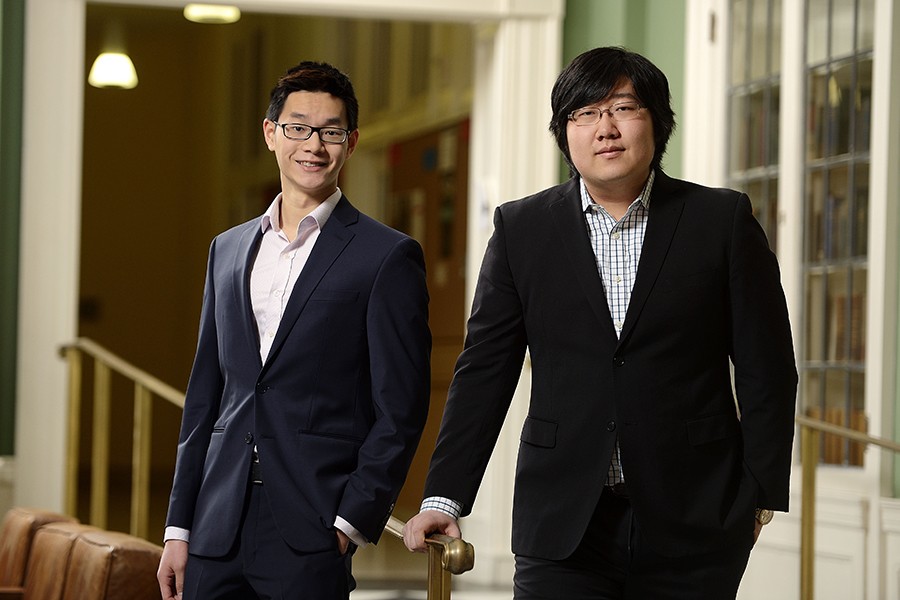 You could argue that it's been a pretty good season for Johns Hopkins University debaters Kuan Hian Tan and Harry Zhang.

In October, the two undergraduates won the 2016 North American Universities Debating Championships in Ottawa. By successfully proposing the motion "This House believes that indigenous peoples would be justified in sabotaging (violently or otherwise) economic projects in the event that they are built across or on their land without their democratic consent," they edged out teams from Stanford, Yale, and Harvard.

With their victory, Tan and Zhang become the first-ever Johns Hopkins team to win the NAUDC, the official continental title tournament for North America in the British Parliamentary debating format, which is the primary international format of university debate used for the World Universities Debating Championship. Later this month, they will fly to the Hague to compete in the 2017 World Universities Debating Championship.

In the world of collegiate debaters, Tan and Zhang are old pros. Tan, an third-year international studies major who is also completing a social policy minor, began debating around the age of 13 and competed with his native Singapore's national team when he was in high school. Zhang, a senior with a double major in pre-med international studies and sociology, grew up in Calgary, Alberta, and participated on teams throughout junior high and high school. The two met and became debate partners last year through the Johns Hopkins Debate Council, the only competitive debate society at Hopkins.

A good debater, says the pair, needs to be knowledgeable about current affairs, as well as moral and ethical issues; should have a fierce intellectual curiosity; and should have a constant willingness to learn. To prepare for competition, they read broadly and voraciously—in addition to The New York Times, Tan favors the BBC, and Zhang spends a considerable amount of time on Reddit. They also revisited old debates in the debate council's casebook and watched videos of debates.

Each also has his own subject area strengths. "Harry is very strategic in debate rounds," says Tan. "He also is very strong in sociology and science."

Tan is exceptionally knowledgeable about current events, says Zhang, and brings a strong international perspective, particularly in political theory and international relations that focus on the Middle East and East and Southeast Asia. "Kuan is also confident in his ability to speak well," adds Zhang.

"It helps to enjoy grandstanding," explains Tan. "I like arguing, and I like winning, and a debate is having a place to do that."

Debaters are also famously superstitious, says Tan. This extends to everything from wardrobe—Tan has a collection of lucky shirts and cufflinks—to managing expectations—the team missed their flight home from Ottawa because they hadn't counted on advancing to the finals.

Tan and Zhang estimate they spend around 10 hours a week practicing with the debate council, in addition to participating in weekly or monthly competitions at other universities. Being involved in debating "makes for a rather different college experience," says Zhang. "But it's pretty rewarding."

Adds Tan: "It's a fun, competitive game. And it's more exciting than chess."