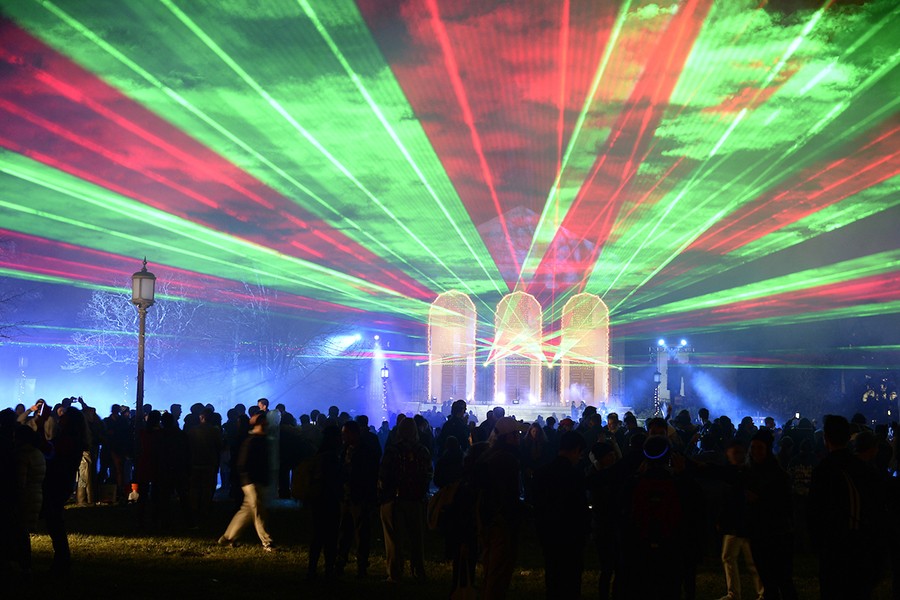 'Tis the season for final papers, late nights at MSE Library, and an extra shot of espresso in a warm drink from Levering Café. These testimonies to the end of the fall semester at Johns Hopkins come with one last celebration before students buckle down to prepare for exams—the annual Lighting of the Quad.

On Wednesday night, the JHU community gathered on the Homewood campus for this seasonal tradition, which took place on Wyman Quad due to ongoing construction outside of Krieger Hall. There were no fireworks this year, but there was a laser show, roller skating, ice sculpting and fire-spinning performances, and a witty address from JHU Provost Sunil Kumar.

"This is me at my gushing best," Kumar said. "This is the sorbet between the main course of the a capella groups, and the dessert of the lighting. So I have to be as boring as possible."

The new provost shared three lines from the Pavamana, a Hindu mantra, which he read in both Sanskrit and English.

"Lead me from darkness to light. Lead me from untruth to truth. Lead me from mortality to immortality," Kumar said. "Perhaps this lighting is more than just turning on a fake switch. Maybe it's a symbol of all of us trying to go from less truthiness to more truthiness."

With that, the crowded quad counted down from 10 to one—at which point green and red lasers beamed from in front of Shriver Hall, and flashed in sync with traditional holiday music.

Students sipped on cider and hot chocolate, and snacked on popcorn and gingerbread cookies as they watched the show. For some, this would be their last Lighting of the Quad as a JHU undergraduate.

"I come here every year, it's like my favorite Hopkins tradition," said Nicole Cohen, a senior environmental engineer major. "It's a bit more hectic than past years, but it's still nice to come out as a community."

"It's also one of my favorite events," Sooklal said. "It's a good time to take a break and celebrate with the rest of the campus."