Award provides all expenses for year at Beijing's Tsinghua University, to study, travel, and develop a better understanding of China

Johns Hopkins University graduate Oladotun "Dotun" Opasina has been named a Schwarzman Scholar, the first student from the university to win the newly established award. 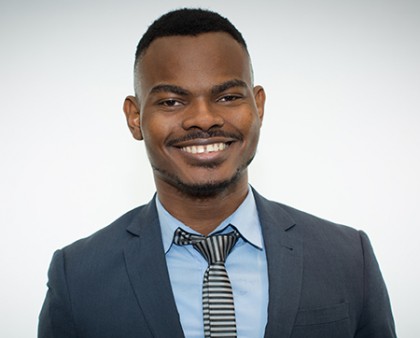 Opasina, a 24-year-old from Nigeria who graduated in May with a master's degree in engineering management, is one of 129 students to win a Schwarzman scholarship this year. The scholarships provide all expenses for a year at Beijing's Tsinghua University, to study, travel, and develop a better understanding of China.

As a Schwarzman Scholar, Opasina plans to study public policy, specifically the role technology plays in China, looking for parallels that could benefit his home country. He called the opportunity "pretty exciting."

"The scholarship made a lot of sense because I'm Nigerian and I'm curious about how technology interacts in the day-to-day lives of people in a fast-growing country," he said.

The Schwarzman Scholars program was inspired by the Rhodes Scholarship. Blackstone co-founder Stephen A. Schwarzman personally contributed $100 million to the program and is leading a fundraising campaign to raise an additional $350 million from private sources to endow the program in perpetuity.

The $450 million endowment will support up to 200 scholars annually for a one-year master's degree program at Tsinghua University, where students pursue degrees in public policy; economics and business; or international studies.

Admissions opened in the fall of 2015, with the first class of students in residence in 2016.