She is among 32 to win prestigious award, which pays for two or three years of study at Oxford

Johns Hopkins University senior Nicole A. Mihelson has been named a Rhodes Scholar, one of the top awards available to American college students. 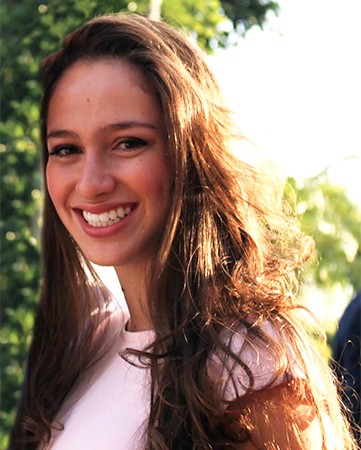 Mihelson, a neuroscience major from Fullerton, California, who will graduate in December, is one of 32 students to win a Rhodes scholarship this year. The scholarships provide all expenses for two or three years of study at the University of Oxford in England.

Mihelson is JHU's third Rhodes Scholar since 2012. At Oxford, she will pursue a D.Phil. in Oncology. She is particularly looking forward to collaborating with top students from across the globe, who she calls "leaders of my generation," while working on novel therapies for an aggressive brain cancer.

"It's an incredible experience," she said. "I am so grateful to my mentors for getting me here. They have been central to my growth as a student and as an individual, and have given me an example of the person I hope to be."

At Johns Hopkins, Mihelson pursued key opportunities as soon as she got to campus. She joined the Laterra lab, which investigates the stem cell theory of cancer. And she convinced public health scientist Sara Johnson to train her in the impact that social factors can have on maternal mental health and child development. That work allowed her to publish in several peer-reviewed publications—a rare feat for an undergraduate.

John Laterra, professor of neurology atJohns Hopkins, said Mihelson impressed him as extraordinary when, as a freshman, she tracked him down over the December holiday break to "relentlessly pursue" a chance to perform brain cancer research in his lab.

"Her profound abilities, dedication, and commitment to scientific discovery earned her co-authorship on two papers and gave me the confidence to let her present our research at prominent international scientific meetings," he said. "Nicole's drive to better the world and—in the original words of Cecil Rhodes—her 'moral force of character and instincts to lead' make her the perfect choice for this award."

"Nicole's drive to better the world and—in the original words of Cecil Rhodes—her 'moral force of character and instincts to lead' make her the perfect choice for this award."
John Laterra, JHU researcher

Johnson, an associate professor in the School of Medicine, said she doesn't typically bring undergraduates onto her team, working on the biological pathways that link poverty and stress to health disparities, because the timeline for the work is often too long for students hoping for quick experience. But Mihelson was undeterred.

"She is academically excellent, and, equally importantly, embodies Johns Hopkins' commitment, as an institution, to do well by doing good in the community," Johnson said. "For me, what stands out is that this work has never seemed self-serving, but an extension of her genuine interest in understanding and contributing to the world around her."

At Johns Hopkins, Mihelson volunteered with the campus group Food as Medicine, going to Baltimore elementary schools to teach students about healthy eating. She also volunteered weekly as a Spanish medical interpreter in a women's clinic and held a key role in the MSE Symposium campus speaker series.

Rhodes Scholarships provide all expenses for two or three years of study at the University of Oxford in England and may allow funding in some instances for four years. The awards were created in 1902 by the will of Cecil Rhodes, British philanthropist and African colonial pioneer.

Mihelson will enter Oxford in October 2017.