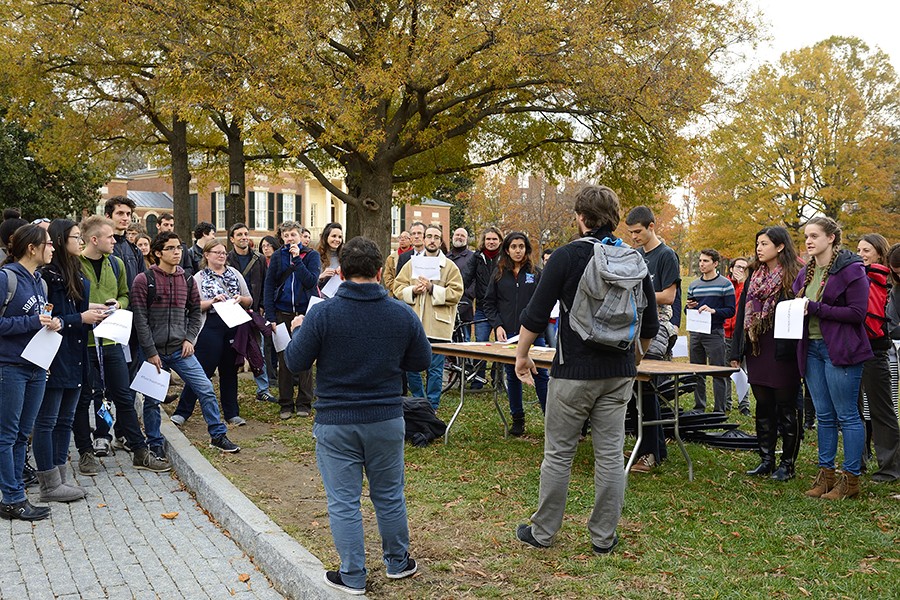 About 75 Johns Hopkins University students joined a nationwide walkout from classes Wednesday afternoon in support of vulnerable students and in protest of the proposed immigration policies of President-elect Donald Trump.

"No more hate. No more fear. Immigrants are welcome here!" the group chanted as they congregated in front of the university's Milton S. Eisenhower Library.

The students said they want the university to designate its campuses as "sanctuaries" for students who aren't in the U.S. legally and could face deportation.

In a petition circulating online, students asked JHU's administration to "take concrete steps to protect its affiliates from mass deportation by becoming a 'sanctuary school' and refusing to allow [Immigration and Customs Enforcement] officers from entering its campuses."

Similar efforts are under way at colleges and universities across the country, including Stanford, Yale, Duke, Columbia, Brown, Northwestern, NYU, and the University of Southern California.

"Johns Hopkins University takes seriously the concerns expressed in our community about potential changes to immigration laws and regulations," the university said in a statement. "President Daniels has been a strong supporter of the Dream Act and DACA to remove barriers to higher education for thousands of young people who have grown up in the United States. The university is strongly committed to the success and well-being of all our students. Like many other institutions across the country, we will be following closely the implications of a possible change in the DACA executive order."

What could happen to DACA recipients under Donald Trump

While it is unclear what policies the Trump administration will put in place, the issue of immigration was a cornerstone of Trump's campaign, which included promises to deport all undocumented immigrants and to build a wall along the U.S.-Mexico border. In an interview aired Sunday by CBS' "60 Minutes," Trump said that he planned to deport up to three million immigrants who "have criminal records."

Trump also said during the campaign that he plans to repeal all executive orders put in place by President Barack Obama, which include the Deferred Action for Childhood Arrivals program, or DACA. DACA, enacted in 2012, allows certain undocumented immigrants—so-called Dreamers, who entered the U.S. before turning 16 and before June 2007—to receive a renewable two-year work permit, obtain a driver's license, and be exempt from deportation.

Obama said that, during a one-on-one meeting last week, he urged Trump to think "long and hard" about preserving DACA. Recent estimates suggest DACA status has been granted to about 750,000 people.

"It's important for us to show solidarity with those marginalized groups, people who might think that they're unsafe," said Vikram Chandrashekhar, a biomedical engineering doctoral student. "I think that movements like this, and people walking out and standing in support of others, lets them know that at least they're safe here, and that it's OK to be who you are, and that there's no war that's going to be waged against your identity and against your person. Those people all matter, and they're important to us here."

Peak, who said his wife is an immigrant, expressed similar sentiments.

"After this election there's been this kind of shadow of fear that's been laying over the entire country," he said. "And we need to be able to give spots that are safe, spots that are a sanctuary, so that people don't live in that constant state of fear. … I'm more than willing to let my voice be heard if it's going to help someone else."

JHU's Office of International Students provides resources for international and immigrant students at all Johns Hopkins divisions and is available to answer questions related to student immigration status.

Terry Martinez, dean of student life at the Homewood campus, encouraged students with questions or concerns to reach out to the Counseling Center, the centers for Diversity and Inclusion, and/or the Office of Dean of Student Life. Additionally, she said students interested in civic engagement should contact the Center for Social Concern.