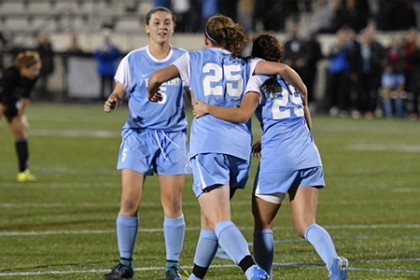 With the win, Hopkins (17-2-2) advanced to the third run for the eighth time in program history, where it will face Williams (17-0-2) on Saturday with a spot in the NCAA quarterfinals at stake. The two teams met in the NCAA tournament in 2013 and 2014; Williams defeated JHU 1-0 in the NCAA semifinal round in 2014.

In Saturday's opening round, Johns Hopkins knocked off Western Connecticut State, 3-1, on the strength of Van de Loo's three goals.

The winner of Saturday's game between Hopkins and Williams will face the winner of a third-round matchup between Messiah and Middlebury.