Dalia Mogahed was in her kitchen finishing breakfast when she looked up at her television screen. What she saw, footage of the Sept. 11, 2001, terrorist attacks, filled her with outrage.

Mogahed observed troubling words in the news: "Muslim terrorists," "Middle-Eastern descent," "bomb Mecca." For the first time in her life, she was afraid for someone to know she was a Muslim. 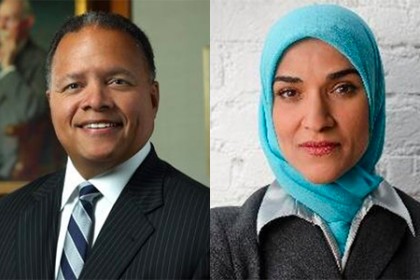 The following Friday, Mogahed was instructed to stay at home because some mosques had been lit on fire. Nevertheless, her family attended their mosque and experienced an unexpected act of support. The mosque was filled with people of all faiths who had come to show love toward the Muslim community.

Mogahed, now director of research at the Institute of Social Policy and Understanding, reflected on this moment during her keynote speech, which concluded the 13th annual Johns Hopkins Diversity Conference on Friday.

"It was that act of compassion, of courage, on the part of all of these people, all of these neighbors, that I decided at that moment to dedicate my life to bringing about understanding; to making our understanding about people, about facts and relationships, and not fear," she said.

Hosted by the university's Diversity Leadership Council, the conference invited students, faculty, and staff to a half-day of networking and workshops on the Homewood campus.

Attendees were able to choose two workshops in which to participate. Workshops explored topics on mental health conditions, LGBTQA and undocumented university students, blackness at a predominately white institution, retention and recruiting, and more.

Robert S.D. Higgins, the Johns Hopkins Hospital's surgeon-in-chief, gave a plenary speech about his greatest challenges and triumphs. He encouraged members of the audience to become agents of change who enhance inclusion and diversity in the Johns Hopkins community.

"Through programs like this which strive to enhance and honor diversity and create a more inclusive and welcoming world here at Johns Hopkins and in greater Baltimore, I believe that we can make a difference," he said. "As President Obama recently said in an article for Wired magazine, 'We are far better equipped to take on the challenges we face than ever before … by unleashing the power of all of us, for all of us.'"

To further create an inclusive environment, conference guests were asked to place a gender preferred pronoun sticker on their name tags. The event's program also provided a list of each all-gender restroom on the Homewood campus.

Christianne Marguerite, a senior global environmental change and sustainability and Africana studies major, said she hopes more students will attend diversity related events similar to the annual conference because they raise awareness on important issues. Marguerite is one of two undergraduate representatives on the Diversity Leadership Council and helped create a subcommittee that concentrates on student engagement.

"It's definitely making a difference," she said. "I especially appreciated the points about student mental health and how students of color, particularly black students, are affected by black social justice movements and violence against blacks.

"It's really important to note that students in general are having a rough time on campuses of [predominantly white institutions]. But with the addition of trying to keep up with what's going on in the world and in our nation, along with keeping up with school work, and also feeling the need … to have a voice, it's really draining."

Erin Gleeson, senior events specialist for the Office of Institutional Equity and member of the council, said that the diversity conference is an important event for a university such as JHU.

"Embracing inclusion not only makes for a better environment for our community, but it also enriches the academic experience," Gleeson said. "Listening to a variety of voices and perspectives encourages us to explore new avenues we might never have considered."