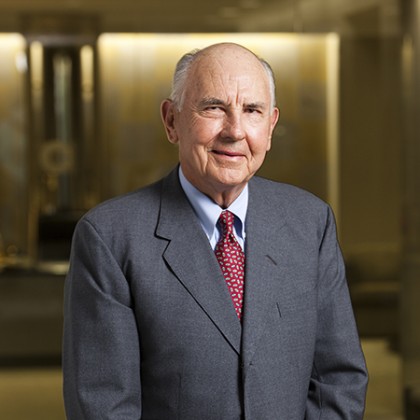 The gift honors the late A. James Clark, a former trustee of the university and of Johns Hopkins Medicine, and a construction engineer and executive for more than 60 years.

Clark Scholars will work with faculty mentors, network with professional engineers, and learn from experts in their fields as part of leadership, business, and innovation training during their undergraduate years. They also will contribute to the Baltimore community through service-learning projects.

"The Clark Charitable Foundation's magnificent gift reflects Jim Clark's enduring legacy at Johns Hopkins of transforming the architecture of our university and helping to educate the engineering leaders of tomorrow," said Ronald J. Daniels, president of the university. "This gift continues Jim's vision to create an environment that will foster engineering leadership to benefit our society now and for the future."

Courtney Clark Pastrick, board chair of the Clark Charitable Foundation, said that her father "fervently believed that engineering—from biomedical, environmental and civil to mechanical, electrical and all other fields—is vitally important to the future of our society.

"We are proud to partner with Johns Hopkins," she said, "in helping to train future engineering leaders by providing them practical engineering experiences and challenging them to develop solutions to today's real-world needs."

Clark, who died in March 2015 at age 87, was chairman and chief executive officer of Clark Enterprises and built Clark Construction Group LLC to be one of the country's largest privately held general building contractors.

"Jim Clark helped transform our university, from the buildings his company built to the research and education he supported," said Ed Schlesinger, the current Benjamin T. Rome Dean. "We see this in Clark Hall, the clinical towers on the East Baltimore campus, and his investment in people through the Rome Deanship.

"This gift is a continuation of his vision and is consistent with the Whiting School's mission to create an environment that fosters engineering leaders and leadership for the benefit of society and our country.

"We are all the beneficiaries of Mr. Clark's counsel and enduring vision," the dean added. "We are immensely grateful to the Clark Charitable Foundation for the immediate impact and lasting legacy the Clark Scholars Program will have now and for generations to come."

The annual income from the Clark Scholars endowment will be matched by the President's Office, as is the case for all new endowed gifts to the university for undergraduate financial aid.

The gift establishing the Clark Scholars Program is part of _Rising to the Challenge: The Campaign for Johns Hopkins, an effort to raise $5 billion, primarily directed toward students, research and discovery, and interdisciplinary solutions to some of humanity's most important problems. The campaign, supporting both the university and Johns Hopkins Medicine, began in January 2010, was publicly launched in May 2013, and is targeted for completion in June 2018. To date, the campaign has raised $4.4 billion.