During cold and flu season, it can be difficult to determine whether an illness is caused by bacteria or by a virus.

Computational biologist Steven Salzberg—a Johns Hopkins Bloomberg Distinguished Professor with appointments in the schools of medicine, public health, and engineering—says that's "akin to not knowing whether the food on your plate is animal or vegetable."

In an editorial for Bloomberg View, Salzberg writes that two technological breakthroughs in DNA sequencing in the past 10 years have made diagnosis "far easier, cheaper and faster, by testing for thousands of infectious organisms at once." But without approval from the FDA, these medical tools won't make it to the marketplace—or the doctor's office.

The first breakthrough has been the improvements in the volume of DNA sequencing, which uses automated sequencers to generate up to 400 billion bases—the As, Cs, Gs and Ts that make up DNA, says Salzberg—per day. This increased volume makes DNA sequencing 400,000 times faster than it was 15 years ago, and 75,000 times less expensive. Salzberg says it takes only a few hours to sequence all the DNA in a tissue swab, at a cost of approximately $100.

The second advance is in the scope of genome databases, some of which now include every major known human pathogen, with hundreds of different strains for the most common ones. Genome databases contain about 30,000 bacterial genomes and 80,000 viruses, as well genomes of hundreds of other pathogens caused by microbes that are neither bacterial nor viral.

"The DNA in a single test can be used to diagnose any of the thousands of possible infections," Salzberg says. "The trouble is, the FDA is proposing to make the [approval] process even more difficult."

DNA-based diagnostic tests must meet standards of accuracy and reproducibility set by the 1988 Clinical and Laboratory Improvement Amendment and enforced by the Centers for Medicare and Medicaid Services and the FDA. The FDA has expressed interest in regulating DNA-sequencing diagnostic tests, "something it has never done before," says Salzberg. "And getting FDA approval is much more onerous than getting a CLIA approval."

The FDA's approval process would require every pathogen to have its own separately approved test, delaying the technology, perhaps by years, Salzberg says, and making it more expensive. Also, the FDA requires all labs to use the FDA's own ARGOS database, which has only a few hundred genomes.

"My lab's database, in contrast, has more than 30,000 bacteria and 80,000 viruses," Salzberg says. "Why ignore the thousands of genomes that the scientific community has made freely available?" 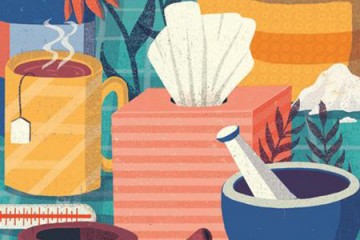 A guide to cold and flu season

Published Sept 27, 2016
Experts answer common questions about the common cold (and flu) to help get you through the aches, pains, and sniffles / Johns Hopkins Health Review