Michael J. Klag to step down as dean of JHU's Bloomberg School of Public Health

After 12 years at helm of Bloomberg School, Klag plans to return to research, teaching

Michael J. Klag, dean of Johns Hopkins University's Bloomberg School of Public Health since 2005, a 32-year member of the Johns Hopkins community, and a world expert on the epidemiology of major chronic diseases, will step down as dean next year and return to research and teaching. 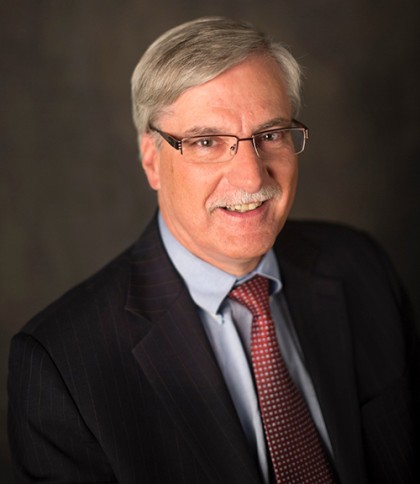 Klag said he will take a sabbatical starting next July, the end of his second term as dean. He will then join the school's departments of Epidemiology and Health Policy and Management.

"For more than a decade, Mike has brought exemplary leadership to the School of Public Health," JHU President Ronald J. Daniels and Provost Sunil Kumar wrote in a message to the university community today announcing Klag's decision. "During his term as dean, the school expanded its reach around the globe, developed innovative and life-changing research programs, and remained a beacon of pride for us as one of the most highly respected public health schools in the world."

Klag is the longest-tenured of the university's current divisional deans and directors. He is responsible for a school whose faculty and students work on world health problems like malaria and HIV/AIDS; the impact of environmental problems and human behavior on population health; improving health care systems in America and around the globe; fundamental questions in molecular biology, biostatistics, epidemiology and immunology; and many other issues.

"Few jobs make you feel good about the future of the human race, but leading the Bloomberg School is one," Klag said. "It has been a privilege to lead such a committed group of faculty, staff, and students who have the goal of protecting health and saving lives, millions at a time."

Long a faculty member in both the schools of Public Health and Medicine, Klag has worked at Johns Hopkins since 1987. He first came to the university three years earlier as a fellow in general internal medicine; he earned his Master of Public Health degree in 1987 from what was then known as the School of Hygiene and Public Health.

Daniels and Kumar praised Klag for guiding the school to new achievements in teaching, research, and global leadership in public health practice and policy. The school now trains public health leaders and research scientists not only at its headquarters in Baltimore, but also in collaboration with partners in India, China, Spain, and Abu Dhabi, and in pioneering distance education programs delivered over the internet.

More than 10 new centers and institutes and 12 endowed chairs have been established under Klag's leadership. As part of the celebration of its 100th anniversary, the school recently announced the launch of the Bloomberg American Health Initiative, funded by a $300 million commitment from philanthropist, Johns Hopkins graduate, and former New York mayor Michael Bloomberg. The initiative is a comprehensive effort against major threats to the health of Americans: addiction and overdose, adolescent health issues, environmental degradation, obesity, and gun violence.

A deeply personal initiative for the dean was founding the Wendy Klag Center for Autism and Developmental Disabilities, named for his late first wife and a focal point for the nation's largest epidemiologically based studies of autism.

Before becoming dean, Klag was already an internationally known expert on the epidemiology and prevention of heart and kidney disease, also focusing on ethnic disparities in patients' risk for serious diseases. Before 2005, when he moved across Wolfe Street to the Bloomberg School, he had served as the David M. Levine Professor of Medicine in the School of Medicine, with joint appointments in public health. He was also the School of Medicine's vice dean for clinical investigation, responsible for oversight of research involving human volunteers. In that role, he undertook a widely praised restructuring of the school's policies and procedures governing research with human subjects.

Klag graduated from Juniata College in 1974 and earned his medical degree at the University of Pennsylvania in 1978. After completing his residency and chief residency in internal medicine at the State University of New York Upstate Medical Center, he served in the U.S. Public Health Service.