Junior running back Ryan Cary ran for four first-half touchdowns, and the Johns Hopkins football team rolled to a 45-29 victory in its season-opener against Washington & Lee at Homewood Field on Thursday night. 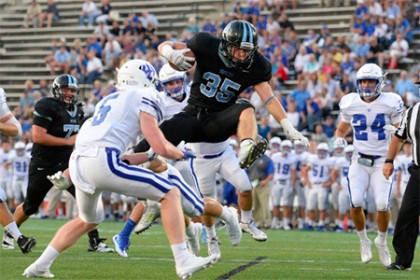 Cary scored on runs of 12, 12, and 11 yards and also caught a 38-yard touchdown pass for the Blue Jays (1-0), matching the school single-game record for touchdowns and surpassing the three TDs he scored during the entire 2015 season. Cary finished with a career-best 158 yards on 20 rushing attempts and added 69 receiving yards to lead a Hopkins attack that amassed 500 yards.

The matchup, the only Division III football game scheduled for 2016 featuring two teams that posted 10-0 regular-season records a year ago, featured two squads ranked in the preseason top 20 by D3football.com. The Blue Jays checked in at No. 15, while the Generals were No. 20.

JHU jumped to 14-0 lead on two Cary scoring runs within the game's first eight and half minutes and led 28-14 at the break on the strength of Cary's four scores.

The Generals (0-1), who led all of college football in rushing last season with more than 400 yards per game, with a rushing attack that accounted for 358 of its 418 total yards.

But second-half touchdowns from Luke McFadden—on a 7-yard pass from Justin Germano—and Tyler Messinger—on a 13-yard run—helped the Blue Jays pull away.

Johns Hopkins' 500-yard offensive output featured 276 yards on the ground and 224 through the air. Germano threw for 174 yards and the one score and rushed for 52 yards. Nine different players had at least one reception for the Blue Jays, who improved to 40-1 all-time in games where they amass 500 or more yards of total offense.

The Blue Jays return to action on Sept. 10 when they travel to Susquehanna for their Centennial Conference opener against the River Hawks.