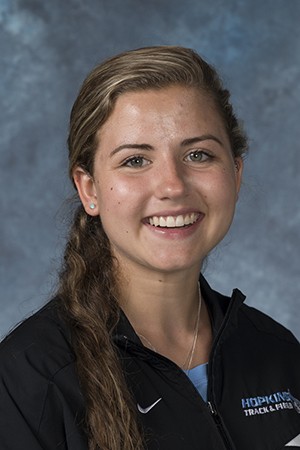 Lara Gaffney is used to leading a charge. The rising senior is captain of Johns Hopkins University's nationally ranked women's cross country team, and as a public health studies major she has traveled to South Africa and Uganda to encourage HIV-infected patients to seek treatment.

This summer, she took on a mission closer to home: helping the Baltimore City Health Department chase down the mosquitoes that carry the Zika virus.

In a recent article published by The Baltimore Sun, Gaffney explains why she spent the summer before her senior year at an unpaid internship in an understaffed public agency.

"I knew that because I had spent time in the public health area abroad, I really wanted to do something in Baltimore and do something with infectious disease and give back to the community," she told The Sun. "It was an untouched area that I really hadn't studied that much about."

Maryland has reported 42 cases of Zika, a mosquito-borne disease that produces few symptoms in adults, but has been linked to fetal death and birth defects if pregnant women become infected.

To fight the spread of the disease, Gaffney helped create packets with Zika prevention information for pregnant women in Baltimore, set up traps to catch mosquitoes, and distribute information to people in city neighborhoods.

"Several people I've spoken to have said, 'Wow, I'm so happy that the health department is coming to my door with this information,'" Gaffney said. "We want to be as proactive as possible, but it was good to hear that people were happy with that."

Gaffney was also instrumental in identifying 135 auto shops in the city that sell tires—which are often mosquito breeding grounds—and developing a plan for letting shop owners know how to remove standing water that collects in the tire, The Sun reported.

"Having Lara here to be able to do the somewhat tedious tasks related to Zika that are time-consuming has been extremely helpful, having someone to actually do that so that some of the staff isn't completely diverted from the other work that we are doing," Haller told The Sun. "I would say her public-health contribution has been every single person she has spoken to and the work she's chasing down now."