Eliminating calories might be good for your waistline, but as it turns out, it might be even better for your brain.

Mark Mattson, a professor of neuroscience in the Johns Hopkins School of Medicine and chief of the Laboratory of Neurosciences at the National Institute on Aging, explains in a recent article in the Johns Hopkins Health Review that cutting energy intake by fasting at least two days a week might help the brain ward off neurodegenerative diseases like Alzheimer's and Parkinson's, and even improve memory and mood. 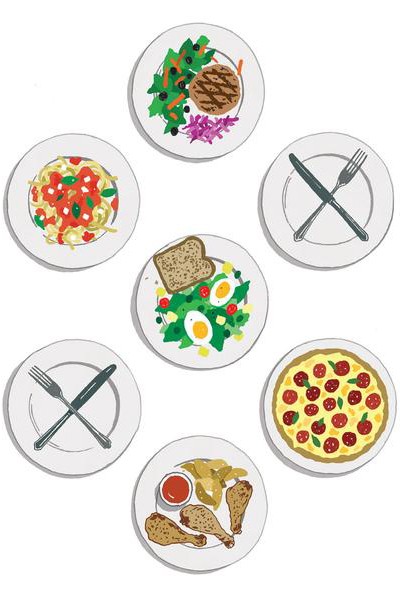 "Fasting is a challenge to your brain, and we think that your brain reacts by activating adaptive stress responses that help it cope with disease," Mattson tells the Health Review. "From an evolutionary perspective, it makes sense your brain should be functioning well when you haven't been able to obtain food for a while."

Intermittent fasting, Mattson says, may improve neural connections in the hippocampus and protect neurons against amyloid plaques, which are associated with Alzheimer's disease. He explains that after eating, glucose is stored in the liver as glycogen. After about 10 to 12 hours, the glycogen is depleted and the body begins to burn fats, which are converted to acidic chemicals called ketone bodies. These ketones promote changes in the structure of the neural synapses that are important for the health of the brain. But eating full meals doesn't give the body the chance to deplete the glycogen stores in the liver, so ketones aren't produced.

Exercise has similar positive effects on the brain. When the brain is challenged by either physical exertion, cognitive tasks, or caloric restriction, the body produces a protein called BDNF (brain-derived neurotrophic factor), which not only strengthens neural connections and increases the production of new neurons but can also have an anti-depressive effect. "Probably during evolution, BDNF evolved to play an important role in increasing neuroplasticity in the brain and forming new synapses crucial to learning and memory as well as mood and motivation," he tells the Health Review.

To incorporate fasting into your diet, take a cue from Mattson:

Mattson recommends people try one of two strategies for incorporating calorie restriction. The first is called the 5:2 diet, which has gained popularity in recent years, particularly in England after the BBC aired a 2012 documentary called Eat Fast and Live Longer in which Mattson was featured. That diet calls for limiting your caloric intake to 500 calories two nonconsecutive days per week while eating a healthy diet in the normal caloric range (2,000 for women; 2,500 for men) the rest of the week. Five hundred calories means maybe a fried egg for breakfast and a small serving of lean protein with vegetables for lunch or dinner.

Another strategy is a time-restricted diet in which you pack all your meals into one eight-hour period a day so your body has time to exhaust its supply of glycogen, start burning fat, and produce ketones. Mattson says animal studies have shown that the time-restricted diet has effects similar to those of intermittent fasting.