Study: Despite medical advances, HIV epidemic continues for men who have sex with men

Across countries and income levels, men who have sex with other men continue to see disproportionately high rates of HIV infection, according to a new study from Johns Hopkins University's Bloomberg School of Public Health.

Though overall HIV rates have flattened in recent years and a diagnosis is no longer the death sentence it was once considered, researchers are concerned that the epidemic persists globally among this specific population.

"It's a tragic situation and it's painful that the history of AIDS is looking like its future, but that's actually where we are."
Chris Beyrer, JHU researcher

"It's a tragic situation and it's painful that the history of AIDS is looking like its future, but that's actually where we are," says study leader Chris Beyrer, a Bloomberg School professor and president of the International AIDS Society. "But the first step in taking on a problem is recognizing and articulating it, and we've really done that here."

The findings, to be published July 9 in The Lancet, follow up on a 2012 call to action from the same group of researchers. Back then, they laid out an ambitious framework to curtail HIV epidemics in gay men, setting targets for policy reform, funding, and improvement in HIV prevention and treatment—including expanded access to pre-exposure prophylaxis, or PrEP, a pill that has proved highly effective in reducing transmission among this population.

The team's latest research found a few successes in reaching those goals, with several nations initiating PrEP projects and the U.S. setting up a new $100 million investment fund from the President's Emergency Plan for AIDS Relief.

But for the most part, the team saw discriminatory practices, lagging policy reform, and a lack of access to treatment contributing to the continued high HIV rates among gay men.

One significant obstacle is the failure to get PrEP to the people who need it most—those who are HIV negative and are at high risk of infection. Beyrer notes that the United Kingdom refuses so far to cover PrEP. And while it's available in the U.S., racial and economic disparities impact access, and low-income, predominantly minority communities continue to see the HIV epidemic persist. The U.S. Centers for Disease Control and Prevention has projected that half of all gay black men will be diagnosed with HIV within their lifetimes. 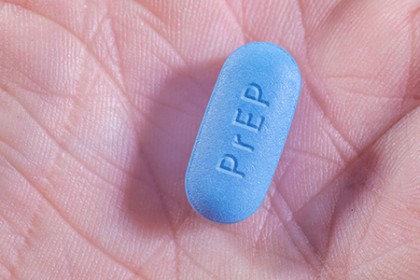 Image caption: Pre-exposure prophylaxis, or PrEP, is a way for people who do not have HIV but who are at substantial risk of getting it to prevent HIV infection by taking a pill every day. The pill contains two medicines—tenofovir and emtricitabine—that are used in combination with other medicines to treat HIV.

For many countries, the politics of providing medical care to gay men remain difficult, says Beyrer, who will oversee the 21st annual International AIDS Conference July 18-22 in South Africa.

While many nations have made great strides in the past four years in terms of gay marriage, in other nations discriminatory policies such as anti-sodomy laws remain in place, making even getting tested for HIV a potentially dangerous ordeal. Beyrer points to a case in Malawi where a man tested for sexually transmitted diseases was arrested after it was clear he contracted the infection from another man. He also notes the backsliding of civil liberties for the gay community in countries such as Russia, Nigeria, and Uganda.

"Stigma and discrimination continue to play a very big role in these epidemics," Beyrer says.

But Beyrer does see some good news on the horizon, with Mexico and other nations such as Argentina and the Netherlands expected to expand the use of PrEP, and many countries moving to repeal anti-gay laws.