Britain's vote yesterday to officially leave the European Union—the so-called Brexit—has created a dramatic shift in the political landscape of the West, according to several experts from the Johns Hopkins University School of Advanced International Studies.

"[I]t's really a historic defeat of American foreign policy," John Harper, a professor of U.S. foreign policy, tells the German news organization Deutsche Welle. "It's quite a historic moment in a negative sense."

He adds: "The Americans have said clearly, 'Don't expect any favors from us.' ... If the people who have voted for Brexit expected that their economic conditions are going to improve, I am afraid they are in for a disappointment."

Britain’s Point of No Return

Brexit a historic slap in the face for US foreign policy

The startling human toll of Brexit

In commentary on the Oxford University Politics Blog, Erik Jones, professor of European studies and international political economy, explains that a political upheaval of this scale has not occurred since the end of World War II. "This move toward disintegration is going to have a powerful impact on the West as a community and as a concept," he says. "Certainly it will have an impact on connections across the Atlantic. NATO will still exist, of course, and so will the special relationship shared between Britain and the United States. But what remains of the EU will have a larger population and greater resources than the U.K. and so it will also loom larger in U.S. foreign policy."

The vote to leave the EU could affect solidarity in Britain. "This was a very emotional referendum, steeped in identity politics," writes Jones. "The result will have emotional resonance across Europe and it will change European perceptions of the U.K. That should be expected as well. Hopefully it will not result in some intemperate reaction." 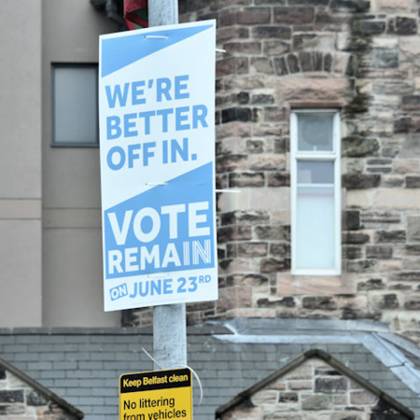 In advance of yesterday's vote, Matthias Matthijs, assistant professor of international political economy, speculated on the possible ramifications throughout Europe if the referendum passed. "Nationalists will want to see the whole [European Union] disintegrate," Matthijs wrote in Foreign Affairs. "France will want to punish the United Kingdom, and Germany will be more cautious and will insist on letting the markets take care of it. Some member states will want to renegotiate their own rules of engagement with the EU, including Poland and the Czech Republic, which have agitated against the union's refugee policy, but also Denmark and Sweden, which are close trade partners of the United Kingdom and may want a similar deal as the British."

The Brexit vote, which was followed by the resignation of British Prime Minister David Cameron, spells an uncertain economic and political future, Matthijs tells the Washington Post. "There's a cloud of uncertainty around how imports will be treated," he says. And passing legislation through the houses of parliament might prove difficult, especially if Cameron is succeeded by pro-Brexit politician Boris Johnson. "Three-quarters of members of parliament in the U.K. are against Brexit. This is not at all aligned with the people, where 52 percent voted to leave," says Matthijs. "So I find it hard to believe that he will be a strong prime minister, who will have a strong hand to negotiate in Brussels."

Editor's note: A previous version of this article did not include commentary from The Washington Post.