How fat becomes lethal, even without weight gain

Sugar in the form of blood glucose provides essential energy for cells. When its usual dietary source—carbohydrates—is scarce, the body goes into starvation mode and the liver can produce glucose with the aid of fat. 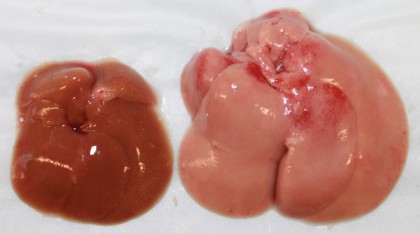 Image caption: The livers of a normal mouse (left) and a mouse whose liver cells lack Cpt2 (right) after eating a high fat diet.

But new research from Johns Hopkins adds to evidence that other tissues can step in to make glucose, too. The research also found that the liver's role in breaking down fats is vital to protect the organ from a lethal onslaught of fat.

The findings, summarized in the June 16 issue of Cell Reports, have the potential to help scientists better understand a growing class of often fatal metabolic diseases.

"We were surprised that other tissues, including the kidney and intestine, could compensate so well when the liver's ability to generate glucose is impaired," says Michael Wolfgang, an associate professor of biological chemistry at the Johns Hopkins University School of Medicine. But he also notes that "it's not unusual in biology to have backup systems for something so crucial to survival as providing energy to cells."

Conducting their studies on mice, the researchers focused on the process known as gluconeogenesis, which maintains blood glucose during starvation and requires the breakdown of fatty acids. It's believed that about 90 percent of gluconeogenesis takes place in the liver, with the other 10 percent happening in the kidneys and gut.

In the mice, the researchers depleted a gene called Cpt2 in the liver, which is necessary for breaking down fatty acids. They were surprised to see that this depletion didn't impact the mice's survival. In fact, it turned out the mice with compromised livers weighed the same as normal mice and used the same amount of energy.

"I still find it hard to wrap my head around how these seriously compromised mice not only survived but were indistinguishable from normal mice in their energy use," says Wolfgang.

In further tests, researchers found that the kidney had dialed up its fatty acid breakdown process in the mice lacking Cpt2. Those results begged the question of just what distress signals the compromised liver was sending to tell other tissues to help. The team discovered that one signaling molecule, known as FGF21, was greatly elevated in these cases.

To better understand the unique metabolism of the mice lacking Cpt2, the researchers put them on a high-fat, "ketogenic diet," similar to the commercial Atkins diet that is very low in carbohydrates. The mice consumed their calories by essentially eating just butter, and their livers couldn't handle the fat. The diet was eventually lethal. The mice had seemingly dissolved all fat tissue throughout their bodies, but their livers were engorged with fat molecules.

"The liver knew it needed to burn fat to make glucose, so it kept asking fat tissue to send fatty acids," Wolfgang explains. "But it couldn't burn those fatty acids, so it just absorbed them and got too fat to function."

The team's data suggest that the absence of the ketones—molecules that are known to slow the breakdown of fats in fat tissue—likely contributed to the continued onslaught of fats on the liver.

All of this, says Wolfgang, might help explain how and why metabolism goes haywire in people who are obese, diabetic, or born with genetic errors that affect fatty acid oxidation.

Wolfgang hopes that further studies on the body's adjustments to a compromised liver will shed light on how to prevent or better regulate faulty metabolism. He says researchers are particularly interested in examining a condition called ketoacidosis, which threatens people with type 1 diabetes.