Johns Hopkins University began a major renovation project last week to replace the waterproofing system on the north side of Krieger Hall, located on the Keyser Quad on the university's Homewood campus. 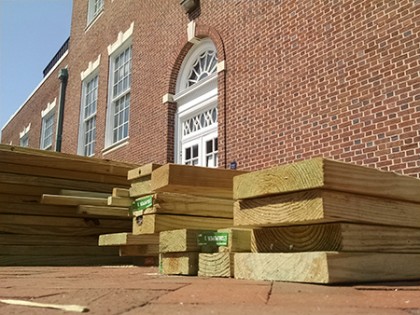 At the same time, the colonnade between Krieger and Ames halls—which spans the area known as the breezeway—will be deconstructed, waterproofed, and reconstructed.

The Krieger Waterproofing and Colonnade Restoration Project is expected to take more than a year, with a projected completion date in August 2017.

A significant portion of Keyser Quad will be fenced off and used for materials storage and deliveries during the project, and the breezeway will be closed. Pedestrians will need to use alternate routes.

"We recognize the disruptive impact of this project and are committed to carefully managing, and where possible mitigating, the challenges it will create for our faculty, staff, and students," says Bob McLean, JHU's vice president for facilities and real estate.

In particular, instead of using the stairs between Krieger and Ames halls to walk through the breezeway, everyone will be rerouted to pathways through the buildings using temporary stairs or to the Gilman tunnel. A map with alternate routes and locations of accessible entrances is available on the project website. 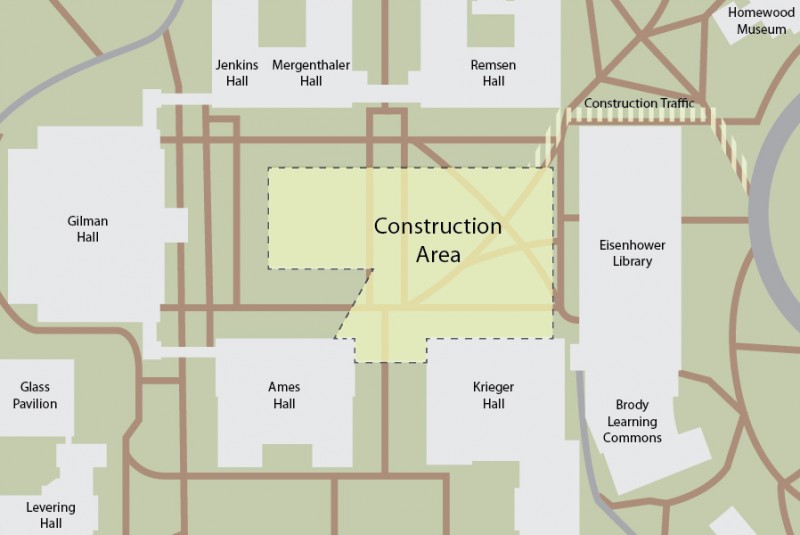 Schools, departments, and student organizations have prepared to use alternate locations for activities that usually occur on the quad, including summer programs, orientation events, and the annual Lighting of the Quads in early December.

Krieger Hall is one of the oldest buildings on the Homewood campus, with construction completed in 1933.

Water has been infiltrating the floors below ground level on the north side of the building. Johns Hopkins hired engineering firm Simpson Gumpertz & Heger to conduct a study, which determined that the waterproofing system—built more than 87 years ago, during the original construction—needs to be replaced. The firm also discovered water damage to the adjacent colonnade.

To expose Krieger's existing waterproofing system, the north side of the building will be excavated to a depth of 27 feet, creating a trench that will be approximately 20 feet wide and 200 feet long. The ramp from Keyser Quad to the second floor of Krieger Hall will be removed and replaced at the end of the project.

Concurrently, the colonnade will be disassembled, its foundation will be repaired and waterproofed, and the structure will be reconstructed using the existing marble.

Most of the existing trees on the quad will be fenced and protected, others will be pruned or relocated, and some will be removed to allow for the construction and replaced when the project is complete. All affected brick walkways and lawn will be restored at the end of the project.

Occupants of Krieger Hall and neighboring buildings can expect the noisiest activities to occur from 6 a.m. to noon, with less disruptive activities through the afternoon. To minimize the duration of the project, work will also occur on the weekends. The five classrooms on the north side of Krieger Hall—rooms 108, 300, 302, 304, and 308—will not be used during construction, and the university will renovate them during that time.

Project details and regular updates will be available on the Facilities and Real Estate website.