A scientist's work should involve more than conducting research and writing journal articles, Mary Wooley says. Scientists also have to be advocates for their own work and help others see the value in it.

"The four most important words you can say to a stranger are 'I work for you,'" Wooley said Thursday at the third annual Johns Hopkins Postdoctoral Retreat. "Then you'll probably end up making a friend for science."

Wooley, a scientist herself, is also president of Research!America, which advocates for making research a higher national priority at a time when even elected officials discredit the work of scientists. Her morning presentation—about the power of researchers to change the sometimes unfavorable public perception of research—set the stage for a day-long conference of more than 300 scientists and fellows with advanced degrees who aim to build diverse and successful careers in science fields.

The event, held on JHU's East Baltimore campus, brought together researchers from seven Johns Hopkins divisions and other institutions, including the NIH and the University of Maryland. The retreat featured presentations, poster sessions, and breakout workshops about career development and soft skills like communicating effectively with people who don't have a background in science.

"We want to get the postdocs together to not only showcase their talents and broaden their knowledge, but equally as important, we want to get them together to build relationships and have fun," said Stanley Andrisse, co-president of the Johns Hopkins Postdoctoral Association and a postdoctoral fellow in pediatric endocrinology. 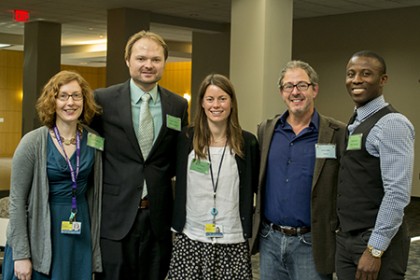 Science comedian Brian Malow stressed the importance of storytelling, even in professional presentations.

"People come up [to organizers] at conferences and say, 'Here's my presentation,"' he said, imitating someone handing over a USB flash drive. "No, those are your slides. You are your presentation."

It was a sentiment Wooley had touched on earlier when she advised the audience to "tell your story, not your data."

Participants had an opportunity to practice what the speakers preached during the oral presentation session and afternoon poster sessions. Alba Abzola won first prize in the poster session category, and each of the five speakers were awarded monetary prizes for their participation in the oral presentations, with Akshata Almad taking first place. Saumil Sethna from UMBC was presented with the Visiting Scientist Award.

The retreat was organized by the Johns Hopkins Postdoctoral Association and sponsored by the Office of Postdoctoral Affairs, The Sidney Kimmel Comprehensive Cancer Center, the Krieger School of Arts and Sciences, the Bloomberg School of Public Health, Active Motif, Agilent Technologies, BioRad Laboratories, and Thermo Fischer Scientific.