Bootup Baltimore aims to expand computer access across the city 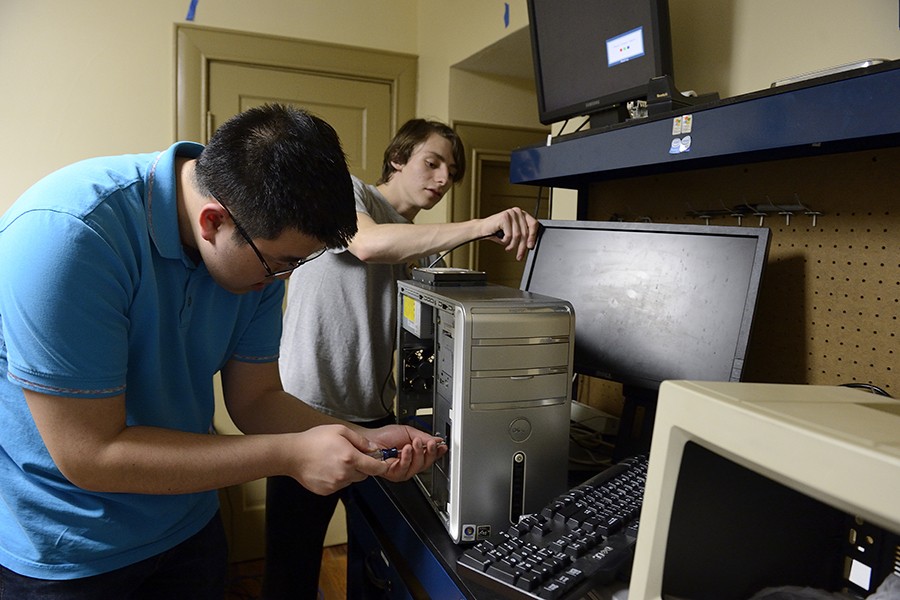 Do you have an old, slow PC collecting dust in a closet somewhere? A first-generation iPad powered off and tucked away in a junk drawer?

Imagine those cast-aside gadgets—outfitted with a newer, faster operating system—in the homes of Baltimore City schoolchildren.

A group of Johns Hopkins University students is making this possible.

Each week, a veritable Geek Squad assembles to restore recycled, run-down computers to functioning devices that can be distributed throughout the community.

It's part of the group's two-fold mission: Providing both the tools of technology and the knowledge of how to use them.

Each week, a veritable Geek Squad assembles to restore recycled, run-down computers to functioning devices that can be distributed throughout the community.

It's trial and error: take off the lid, check the RAM, rearrange the cables. "It's that challenge that a lot of people come for," Xu says.

And anyone is welcome to drop by and tinker with a malfunctioning Macbook or a dusty desktop. With an ample supply of pliers, cutters, strippers, screwdrivers, and a step-by-step checklist for first-timers, the job is not strictly for the computer science crew.

On a refurbished desktop, the group monitors its inventory—from the brand new laptop with a slight scratch to the mass of old computers that Johns Hopkins Medicine often donates.

If a computer can be restored, they install a new operating system, settings, and programs. Finally, the computer is ready to be sent out to the community—Bootup Baltimore partners with dozens of school groups and nonprofit organizations across the city.

Some of the most enthusiastic recipients are the elementary school students at the nearby Barclay School, where Bootup members teach a weekly literacy class to second- and third-graders.

Upon the semester-long course's completion, these students—the majority of whom do not have a computer at home—walk away with a functioning laptop to call their own.

"I think it's really important to interact with computers at early ages," says junior Eric Calder, who leads the course.

In Barclay's computer lab, the hour-long after-school enrichment program begins with an interactive typing game called Dance Matt Typing. The volunteers—typically one for every three students—instruct the students to practice proper 10-finger keystrokes, reminding them that in time they will cover the keyboard as a test.

They then segue into the weekly lesson: An introduction to user-created gaming, or a look at the inside of a computer, or a how-to tutorial on Wikipedia or audio editing.

A recent lesson introduced the students to Google Maps, where they toured the panoramic beaches of California and Time Square in New York City.

"They're really interested in the intricacies of computers," Calder said. "Whether it's chips and cameras, the computer itself, or how they connect to the internet. I have a student who asks me about viruses."

They've recently expanded their literacy offerings to the Cherry Hill neighborhood, where they help senior citizens and other adults learn computer skills. The course covers the basics—like how to use a mouse—and programs, including Microsoft Word and Excel.

They, too, receive a refurbished computer at the course's completion.

"They can't believe that they got a perfectly working computer for nothing," Xu says, "and they can't wait to start using them."