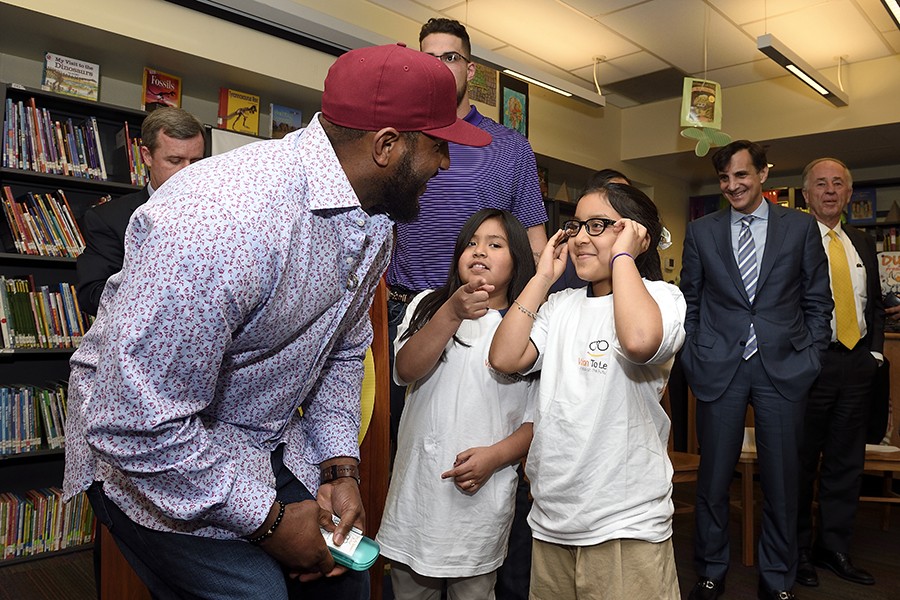 A deceptively simple solution to increasing student achievement in high-poverty schools may begin with a pair of eyeglasses. 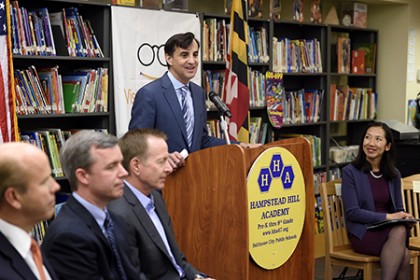 The reading skills of second- and third-graders who were given eyeglasses increased significantly compared to their classmates who didn't need glasses, according to a Baltimore Reading and Eye Disease Study of 300 students in 12 schools. The study, funded by the Robert M. and Diane v.S. Levy Family Foundation, was conducted by researchers at the Johns Hopkins School of Education and Wilmer Eye Institute at JHU's School of Medicine.

Encouraged by their findings, the researchers are expanding the study to include 132 Baltimore elementary and middle schools over a three-year period.

Their research underpins a unique partnership announced today between Johns Hopkins University, the Baltimore City Health Department, the Baltimore City Public School System, and the Los Angeles-based nonprofit Vision To Learn. The project, Vision for Baltimore, will provide free eyeglasses and vision screenings for pre-kindergarteners to eighth-graders in all Baltimore City public schools.

"This public-private partnership is an unprecedented effort that will have a profound effect on the learning outcomes in our city's schools," Johns Hopkins University President Ronald J. Daniels said. "An evaluation of this effort by Johns Hopkins researchers will be critical and may help to shift the approach of school systems across this country."

"We know these kids are capable and motivated. What's standing between some of them and success could simply be a pair of glasses."
Robert Slavin, JHU School of Education

Daniels led the effort to generate funding for the project and to bring the partners together to benefit Baltimore's public school students. The research is supported by the Hackerman family and the Abell Foundation, as well as a provisionally approved grant from the Laura and John Arnold Foundation.

The Baltimore City Health Department will do initial screenings, with the support of the Anne E. Casey Foundation, the Abell Foundation, and Vision To Learn, which has mobile eye clinics outfitted for onsite services. Glasses for the program will be donated by Warby Parker, a New York City-based online eyewear retailer that has committed to providing two pairs of glasses to approximately 2,750 Baltimore City school students between pre-kindergarten and eighth grade throughout the 2016-2017 academic year. Staff from the School of Education and Wilmer Eye Institute will work with the schools to train school staff and maximize use of the glasses.

Over the next year, Vision for Baltimore will operate in 50 schools across Baltimore City. The program will serve all public schools over the next three years and continue to rotate throughout schools thereafter.

Hampstead Hill Academy in East Baltimore is serving as a pilot for the program. Of the school's 742 students, 202 failed their vision screening and were deemed in need of additional examination.

The Johns Hopkins research team—which includes Robert Slavin of the Johns Hopkins School of Education and Megan Collins, David Friedman, and Michael Repka of Wilmer Eye Institute—will collaborate with the Health Department, Baltimore City schools, and Vision To Learn to evaluate the program and study its impact on academic performance.

The failure to learn how to read among disadvantaged students is far higher than it is among other students. Only 21 percent of students qualifying for free or reduced lunch scored at or above "proficient" in reading compared to 52 percent of students who did not qualify for free lunch, according to a 2015 report of the National Assessment of Educational Progress. Among African-Americans, 18 percent scored at or above "proficient," as did 21 percent of Hispanics, compared to 46 percent of whites.

"These differences are well-known to education researchers and policymakers, and they have driven both research and policy for many years," Slavin said. "Existing research and policy have focused on curricula, teaching methods, accountability, and other changes from within the education system. We are going beyond the usual solutions to see how much eyeglasses could improve reading outcomes on a large scale."

Disadvantaged children are less likely to see an eye care professional because their parents cannot afford a vision test or they don't know how to access free tests and glasses. Experience indicates that solving the eyeglasses problem in inner-city schools must be a continuing school effort, Collins said.

"For Vision for Baltimore to work," she said, "school personnel must be excited, engaged, and empowered to keep track of vision issues, and parents and students themselves must be engaged in support of the idea that vision care is an essential part of learning."

The idea, Slavin said, is to make it a routine part of what schools do, rather than make it just the responsibility of the Health Department or eye care professionals who don't have a formal role in the schools.

Little is known about the impact of various vision problems on reading. According to the Hopkins research team, there is a general consensus that untreated vision problems contribute to reading difficulty, although the extent to which treatment will improve reading performance is not well-established.

Slavin said that if the initial results of the Baltimore Reading and Eye Disease Study study hold up and reading comprehension among disadvantaged students continues to rise with the widespread use of eyeglasses for students who need them, it could become a significant "school reform."

"I've spent my entire career working in high-poverty schools," he said. "I've seen kids come into school bright-eyed and eager to learn. By third or fourth grade, you see kids who have already given up on themselves. The most rational response for them is to avoid the work, get involved in other things, or act out. You're not going to derive self-esteem or success from school, so you look for it somewhere else.

"We know these kids are capable and motivated. What's standing between some of them and success could simply be a pair of glasses."

Founded in 2012, Vision To Learn has provided more than 53,000 eye exams and more than 40,000 pairs of glasses to rural and urban students in California, Delaware, Hawaii, and Iowa. Vision for Baltimore will be Vision To Learn's first citywide initiative and the first large-scale public health intervention.