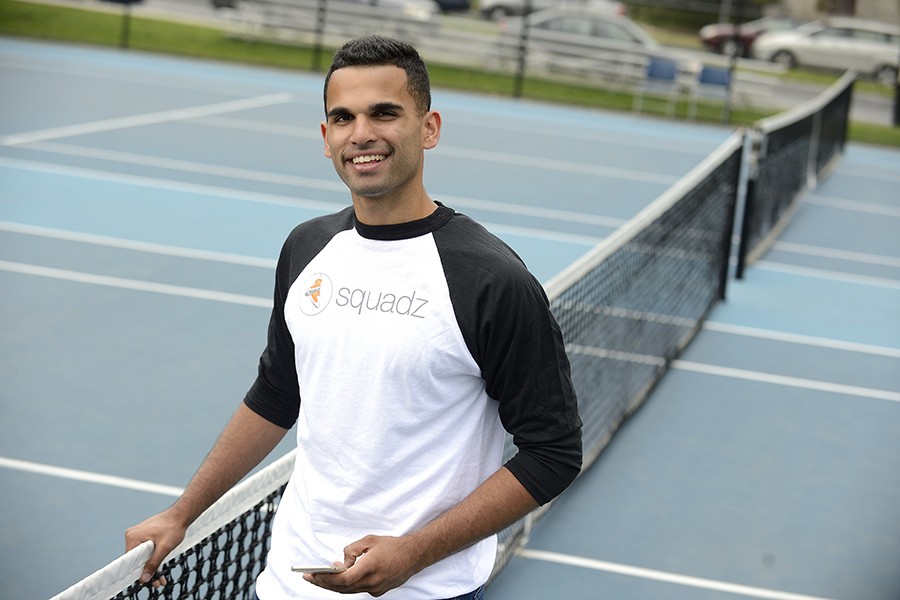 In high school, Nikhil Panu played varsity basketball and tennis, but his appetite for competition didn't stop there. When not in uniform, the 6-foot-4 San Jose, California, native ferreted out neighborhood pick-up games—any sport would do. Panu and his friends would spontaneously trek down to area fields or gyms on weekends in hopes that a few similar-minded folks would show up to form equal teams for an hour or two of soccer or 5-on-5 basketball.

But Panu discovered what many weekend recreation warriors know: the endeavor can be hit or miss. Sometimes the venue was vacant, or a friend would back out, leaving the group shorthanded. On other occasions, Panu arrived with "numbers," but the court or field would be jammed with bodies and games already under way. "We got next." Sure, but when?

"It was frustrating," says Panu, now a junior at Johns Hopkins in the Department of Computer Science's combined bachelor's/master's degree program, and a guard and co-captain for the Blue Jays men's basketball team. "I spent a lot of time and effort trying to figure out where and when I could play, with no assurance a game would actually happen when I got there."

The app, essentially a booking system, launched in February and is currently being piloted on JHU's Homewood campus and in the surrounding area.

Panu envisioned a virtual community bulletin board where someone could see where and when pick-up games were scheduled and who was available to play. He shelved the idea until he got to Johns Hopkins, and then the summer after his freshman year he began to design software that could help a person find a partner for a doubles tennis match or a fourth for golf, and above all take the guesswork out of pick-up game scheduling. The result is Squadz, a free app for iPhone and Android mobile devices that has the potential to be the OpenTable or Airbnb of recreational sports.

The app, essentially a booking system, launched in February and is currently being piloted on JHU's Homewood campus and in the surrounding area.

Like with most fitness and lifestyle apps, you first have to create an account with a username and password. The app's profile interface asks you to choose your favorite recreational sports and level of experience. Say, maybe you played tennis competitively in college, but now you're in the market for someone to run or shoot some hoops with. The app lists the traditional sports—baseball, football, golf, volleyball, soccer, etc.—but you can add others. Quidditch, anyone?

The Squadz home screen displays a Google map and all user-scheduled pick-up games in the immediate area for today, tomorrow, or sometime in the near future. The app uses your phone's GPS to determine current location, but you can zoom out to see a larger area. The games appear as green (public) and red (in-session) pins, which you tap on to display basic details: what sport, where and when, who is showing up, and each player's general abilities. Still interested? Tap the details to reveal a screen with a more in-depth summary of the event and a "join" tab. There's also a message board where you can communicate with other participants and receive updates.

Any Squadz user can create his or her own public game or a private one that only those invited will see. The user can filter by sport or see all scheduled games. You can also see what friends, dubbed "teammates," are doing, and who they became friends with. The app lets you easily add teammates from your phone's address book, an associated Facebook account, or by requesting friendships of existing users. In the near future, the app will likely include a group messaging feature so users can gauge interest before scheduling a game. 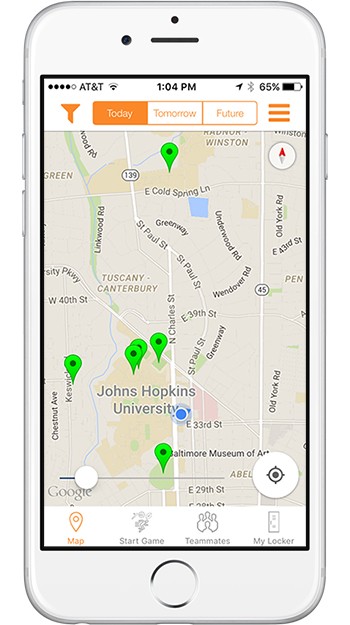 The app's "locker" tab lists all your upcoming and past games, which Panu says comes in handy if you can't remember who passed you the ball for the winning bucket last week.

The locker also features the app's settings gear, where you can change preferences, such as radius of the home map and level of notifications. In terms of privacy, Squadz lets you appear just as your username, or you can allow people to see your full name and contact info.

Panu says the app already has hundreds of users, including members of the Johns Hopkins men's basketball team, who use Squadz for scheduling offseason activities.

Teammates, Panu says, don't necessarily have to be close friends.

"These are people you play with, or bond with on a recreational level," he says. "I think that's the next boundary to cross in terms of social networking. People do this all the time. They have their golf buddies or play in a recreational league. Moving forward, I want to give everyone the means to facilitate this spontaneous migration activity, whether it's pickup basketball at lunchtime or ultimate Frisbee in the park after class."

This year, Panu brought on partners to further develop and market the product, including three of his basketball teammates: senior economics majors Austin Vasiliadis, Niko Kotoulas, and Sam Gordon. In terms of product awareness, Panu and friends have used word-of-mouth and done some door-to-door salesmanship at the O'Connor Recreation Center and JHU tennis courts. He also promoted the app at the recent Johns Hopkins-Maryland men's lacrosse game.

Panu views Johns Hopkins as a testing ground to see what's working and what areas needed improvement. Early on, he realized it's a challenge to treat every sport the same, and categorizing skill levels is an inexact science. For example, someone might have run track and field in college but be less advanced now than a recreational runner.

"There has to be some level of individualism," he says. "Everyone has their story with how they play their sport. Skill level is complicated, because people might think they are a lot better than they really are, or sell themselves short."

This summer, the four classmates intend to travel to Panu's hometown to work on strategy, business development, and form partnerships with venues and gain a user base in the Bay area. Panu says he envisions Squadz being useful to venues like high school gyms, college recreation centers, and community centers that are often under-booked in terms of space rental.

"This app can help them fill up their unused capacity," he says. "I can also see it useful to track the number of people going to parks, and when they're checking in."

Currently, the only limitation of the app is the number of registered users. For this app to fulfill its potential, a robust user base is needed. And that's Panu's next hurdle to jump.