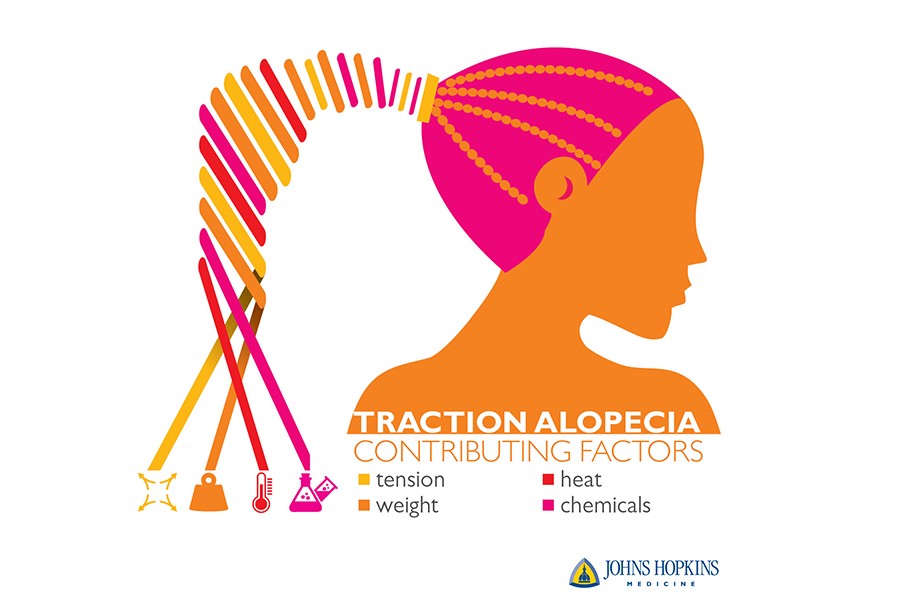 A new study from Johns Hopkins lends evidence to the belief that certain hairstyles—particularly those popular among African-American women—contribute to hair loss. 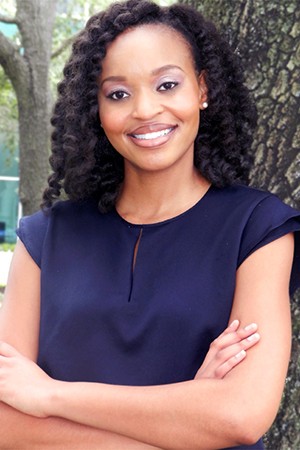 An analysis by researchers at JHU's School of Medicine, published in the Journal of the American Academy of Dermatology, finds that certain scalp pulling and chemically treated hairstyles contribute to traction alopecia—the gradual loss of hair caused by damage to the hair follicle from prolonged or repeated tension on the hair root.

"Hair is a cornerstone of self-esteem and identity for many people," says Crystal Aguh, assistant professor of dermatology at the Johns Hopkins University School of Medicine. "But ironically, some hairstyles meant to improve our self-confidence actually lead to hair and scalp damage."

The hair loss, she adds, is entirely preventable, and early intervention can stop or even reverse it.

"We have to do better as care providers and offer our patients proper guidance to keep them healthy from head to toe," she says.

In their research review, Aguh and her colleagues categorize hair practices into low-, moderate-, and high-risk styles based on the degree to which follicles are exposed to tension, weight, heat, and hair-altering chemicals, such as straighteners. The highest-risk styles, Aguh and her colleagues say, include braids, dreadlocks, weaves, and extensions, especially when applied to chemically treated hair.

These styles are especially popular among African-Americans, Aguh says, because they are low maintenance, but the constant pulling of the hair in one direction, the tight-locking patterns, and the added weight can result in significant breakage and eventually traction alopecia. An estimated one-third of African-American women suffer from traction alopecia, making it the most common form of hair loss among that group.

Damage from these hairstyles is compounded by the use of chemicals and heat. If extensions are affixed with adhesive glue put directly on the scalp, breakage can occur, especially when the glued-on hair is removed. Chemical straightening, perms (activated by the chemical ammonium thioglycolate), heat straightening, and blow drying all carry risk for damage because the practices can weaken the hair shaft, causing breakage.

Wigs attached with clips and adhesives to keep them in place can cause significant breakage, and cotton and nylon wig caps that rub the hairline can also harm hair follicles.

So what's the good news?

Untreated and unprocessed hair can withstand greater traction, pulling and brushing, and overall decreases the risk of traction alopecia regardless of styling, Aguh says. Observations among clinic patients reported in the reviewed studies found that natural styles that use moisturizers with conditioning agents are low risk for traction alopecia

The investigators offered guidelines for dermatologists and other care providers to help patients prevent and manage hair loss. The first line of therapy, they say, is to loosen braids and other high-tension styles, as well as weight on the follicle. Braided hairstyles should be in place no longer than two to three months, they say, and weaves and extensions should also be removed for a period of time after six to eight weeks.

The investigators also recommend people alternate styles and reduce or avoid updos to allow follicles to recover from stress.

"Dermatologists need to be conscious of the fact that many high- and moderate-risk hairstyles greatly improve hair manageability, and simply telling patients to abandon them won't work for everyone," Aguh says. "Instead, physicians can educate themselves to speak with patients about making the best hairstyling choices to minimize preventable hair loss."