Like many seventh-graders, Lidiya Muche and Kaziyah Della like to scrawl lyrics about boys and broken hearts on their notebooks in big, bubbly letters.

But unlike most Baltimore City middle school students, the girls use the latest technology to record their songs, mix beats, and tinker with tones. And their guide into the world of producing is the acclaimed musician Thomas Dolby.

The girls are among a dozen Margaret Brent Middle School students who are learning how to record and produce music through a partnership with the JHU/MICA Film Centre in Station North.

On 10 Friday afternoons, the students rush the half-mile from their school to the newly renovated Centre Theater on North Avenue for the class. They take the elevator to the second floor, walk past undergrads lounging in neon cushioned chairs, and hurry into a computer lab with a connecting recording studio. A tall man with a British accent waits for them. His high forehead and strong jaw would be familiar to anyone who has seen the video for his 1982 hit single, "She Blinded Me with Science"—but that was 20 years before many of his students were born.

As a performer and producer, Dolby has spent decades exploring the intersection of music and technology. He joined the Johns Hopkins University faculty in 2014, becoming the inaugural Homewood Professor in the Arts and director of the Program on Sound in Film. He conceived of the middle school workshop as a way to bring the benefits of the film center to the broader neighborhood.

"I thought it was really important to do something for the surrounding community," says Dolby. Local music producer Loren Hill and his wife, Jay Hill, co-teach the class with Dolby. 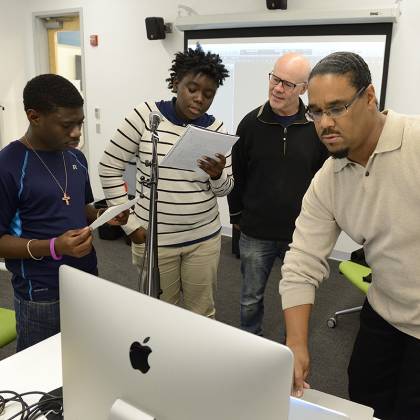 On a recent Friday, Dolby slips on headphones to listen to a rap song written by Fiacre Epossi, 15, and Carlos Ramos Diaz, 14.

The eighth-graders have been friends since they met in an English as a second language class four years ago. Although Carlos spoke Spanish and Fiacre—who goes by Fiat—spoke French, the boys bonded over their love of rap.

Their song, "Over Here Chillin' with My Brother Carlos," pays homage to that bond. Fiat raps in English and Carlos in Spanish; their words overlap and diverge, pinned by a deep bass beat. The boys shake off their shyness as they perform. The music is polished; it's not hard to imagine it being played on the radio.

The boys are awed by what they've created.

"I never thought I could do something like that," says Carlos.

Dolby, too, has been impressed with the leaps the students have made since the workshop began in the fall. They've learned how to create bass lines and chord sequences, write lyrics and use computer programs to edit and upload their songs.

"The big surprise has been the level of talent," says Dolby. "The vocal talent and the musical talent is really quite terrific. I'm really tempted to take these kids off and see if we could get a record deal."

Dolby finds working with middle school students a good change of pace. They bring a mixture of youthful exuberance, playful energy, and "a little teen angst" to the classroom, he says. The students aren't familiar with Dolby's work, although some of their parents are.

"They've never really heard of me or my music," he says. "I'm just this weird English professor to them."

Toward the end of a recent class, everyone troops into the studio to listen to Lidiya and Kaziyah record their songs. Lidiya grips Kaziyah's hand for support. Her voice is warm and clear, surprisingly mature for a 12-year-old. Dolby coaches her through a few takes.

As Lidiya leaves the sound booth, Dolby instructs an assistant to play one of the best passages.

"I want her to like what she hears when she walks in," he says.

Dolby plans to teach the workshop, which is funded by the Warnock Foundation, next year. It is free for the students, who are chosen for the program by their teachers. 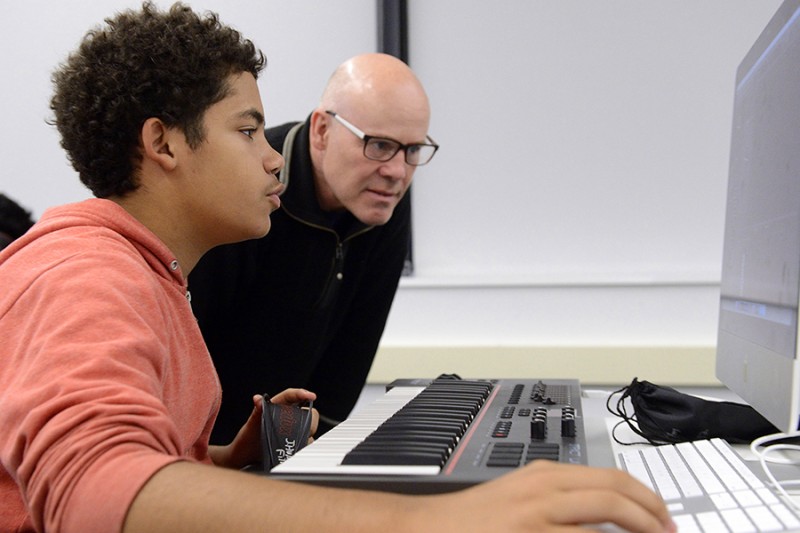