Four Johns Hopkins undergraduate students have received honors from the Barry Goldwater Scholarship and Excellence in Education Program in recognition of their exceptional promise in research careers. 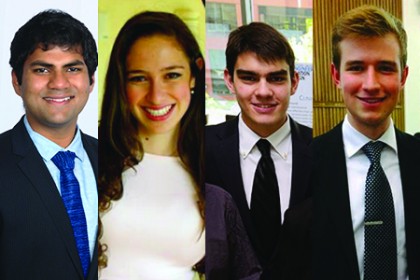 Congress established the scholarship in 1986 to honor Sen. Barry Goldwater, who served his country for 56 years as a soldier and statesman, including 30 years of service in the U.S. Senate.

A Goldwater Scholarship distinction is considered a gateway award for its reputation for giving students a competitive edge when pursuing graduate fellowships in their fields. It is one of the first significant national scholarships focusing on STEM fields—science, technology, engineering and math. This year, 252 scholarships were awarded to students from an applicant pool of 1,150.

"Our campus is brimming with strong Goldwater applicants," says Kelly Barry, director of the university's National Fellowships Program. "The award recognizes the potential for a research career, the same potential that faculty and labs all around the university help to nurture in our undergraduates. When our Goldwater nominees succeed, it's a nod to them and to the STEM community at Hopkins."

Universities nominate four undergraduates for the honor each year. The campus process for nominating Goldwater applicants begins during the fall semester. For information, go to http://web.jhu.edu/scholarships/listing/goldwater.