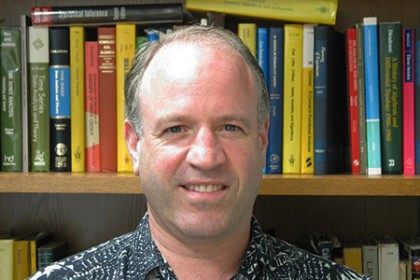 This summer, professor Daniel Q. Naiman will offer a course on the "Mathematics of Music," part of a national effort to use music to teach the STEM disciplines—science, technology, engineering, and math—from elementary school through college.

The four-week course created by Naiman is being unveiled in conjunction with the fifth observance of International Jazz Day on Saturday, organized by the United Nations Educational, Scientific and Cultural Organization, and the Thelonious Monk Institute of Jazz, based in Washington, D.C.

Some of the materials to be used in Naiman's classroom course will be posted online for the general public to view. These materials along with others created by professors across the country will be offered as part of the UNESCO-Monk Institute "Math, Science & Music" project. The effort will be discussed in a forum on Tuesday at the U.S. Department of Education in Washington. Naiman is scheduled to be there, along with faculty members from Harvard; the Massachusetts Institute of Technology; the University of Massachusetts; University of California, Berkeley; San Francisco State; and New York University.

"We want to open the door to science and math to students who might not otherwise be interested in math," said Naiman, who is also an amateur saxophone and bass guitar player. For those who find the abstraction of math hard to grasp, he said it often helps to tie mathematical concepts to a practical application.

In this case, students will be learning to apply mathematical principles to musical questions: What is harmony? What is an octave? What does it mean to tune an instrument? What makes music sound good?

His three-credit course will be open to up to 25 high school and college students who have completed some high school mathematics. Lectures will be conducted four days a week from June 27 through July 29. Students can use the credits toward their college graduation.

The classroom and online teaching materials represent a culmination of years of effort that began with an idea hatched by Grammy-award winning jazz musician and composer Herbie Hancock. Hancock, who took some electrical engineering courses while studying for his undergraduate degree in music at Grinnell College, explained in an interview that he became concerned both about students in the United States falling behind in STEM fields, and about diminishing arts education.

Why not, he thought, blend the two and try to appeal to students through their musical enthusiasm?

"What are young people interested in?" asked Hancock, who is chairman of the Monk Institute, and a UNESCO Goodwill Ambassador. "Why are they wearing their Beats headphones all the time?"

The connection between music and math is plain, said Hancock. Consider the arithmetic values of beats per measure, of knowing which note gets one beat, of the numerical relationships underlying chord theory.

Naiman's three-credit course builds on this fundamental relationship to draw music enthusiasts into stronger grasp of math. Naiman's students will learn how to use number theory to solve problems dealing with aspects of rhythm and harmony. Theories of probability and random processes will be engaged to understand how spontaneity works in music. Students will learn how to use software to analyze the elements of musical signal, including amplitude and frequency modulation.

"If we see that young people are showing more interest in science through programs stimulated from a musical formulation," said Hancock, "I think we can safely say it's a successful direction."