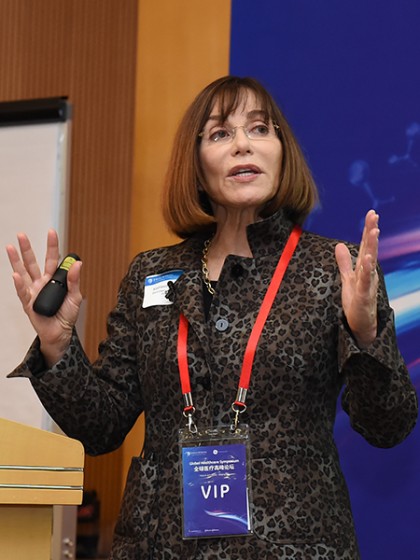 The symposium, sponsored by General Electric, was held March 17 at the General Electric China Technology Center in Shanghai. It featured keynote speeches from John Rice, vice chairman of General Electric and president and CEO of GE Global Growth and Operations, and Carey professor Kathleen Sutcliffe, a Bloomberg Distinguished Professor who is also on the faculty of the Johns Hopkins School of Medicine.

Sutcliffe's remarks, titled "Building a Resilient Organization," centered on her research into how organizations manage risk, uncertainty, and crisis. One of Sutcliffe's key points concerned the nature of productivity and how it can lead to resiliency within an organization.

"At its core, productivity is thinking about the choices we make every day," she said. "It's not necessarily about running faster or pushing harder, it's about working smarter. It's about seeing things in a more nuanced way—really seeing what is in front of us, being mindful, seeing the small details in a situation so we can contingently respond."

The symposium also featured two panels that included executives from GE, Novartis, Johnson and Johnson, and other Chinese companies. Carey Vice Dean for Education Kevin Frick and Phillip Phan, who is the Alonzo and Virginia Decker Professor of Strategy and Entrepreneurship at Carey, also participated in the panels.