For the first time in its history, the Johns Hopkins Carey Business School has received an endowment to create a named faculty chair. Professor Ko Wang is the recipient of the inaugural R. Clayton Emory Chair in Real Estate and Infrastructure. 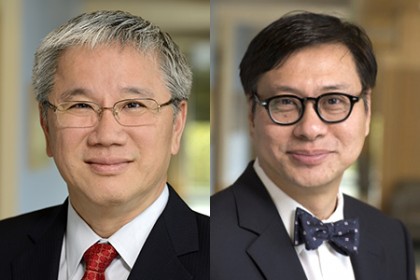 In addition to establishing its first endowed faculty chair, the Carey Business School also created the Alonzo and Virginia Decker Professor of Strategy and Entrepreneurship, awarded to Professor Phillip Phan.

Clay Emory, founder of Emory Properties, established the chair in support of his personal commitment to real estate education. Emory is a 1956 graduate of the Krieger School of Arts and Sciences at Johns Hopkins and a 2012 recipient of the Johns Hopkins Alumni Association's Heritage Award. For many decades, Emory has been a successful real estate developer throughout the United States. He has also served as an advisor to the Real Estate and Infrastructure program at the Carey Business School.

Wang joined the Carey Business School in 2014 and leads the Edward St. John Real Estate Program. His work is published widely in real estate and finance journals, and he co-authored a book for the Oxford University Press on real estate investment trusts. He is the founding executive editor of the International Real Estate Review and co-executive editor of the Journal of Housing Studies. Wang earned his PhD in real estate and finance, an MBA with a real estate concentration, and an MS in community and regional planning at the University of Texas at Austin.

Alonzo Decker was an innovator in the consumer power tool industry and head of the Black & Decker appliance company. His wife, Virginia, served as a director of the Johns Hopkins University School of Continuing Studies, a precursor of the Carey Business School. Both were generous contributors to higher education in Maryland. The named professorship was established in honor of the Deckers.

Phan has been with the Carey Business School since 2008 and was one of the school's first tenured professors. He served as interim dean of the Carey School in 2011 and was vice dean for faculty and research from 2012 to 2015. Phan earned his PhD in Strategic Management from the University of Washington School of Business Administration. He has authored more than 100 peer-reviewed articles and six books in strategy and entrepreneurship, and he has extensive expertise in corporate governance, strategy, technological entrepreneurship, and regional economic development. Phan has consulted for numerous organizations, including the World Bank, Hewlett-Packard, Nokia, Ernst & Young, and Singapore Airlines. In addition to his position at the Carey Business School, Phan holds a joint appointment with the Armstrong Institute for Patient Safety and Quality at the Johns Hopkins School of Medicine.