Johns Hopkins University and Health System leaders sent a message to faculty, staff, and students this morning highlighting some of Johns Hopkins' steps to strengthen Baltimore over the past year and encouraging members of the Hopkins community to continue to seek out ways to engage with the city. 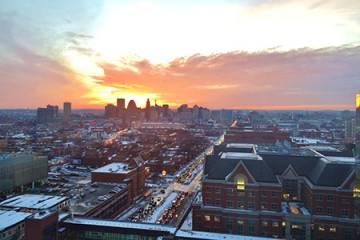 "As gratified as we are by the efforts undertaken by our extraordinary, committed community," they wrote, "it is clear that our work is not yet complete."

This month marks the first anniversary of the tragic death of Freddie Gray and the unrest that followed. It was a moment that exposed gaping disparities within this city while bringing many of us together in common cause. As we approach this somber anniversary, we want to express our profound appreciation for the efforts you have undertaken over the past year to make our city stronger, and to encourage all of us to remember the critical work that still lies ahead.

Johns Hopkins' commitment to Baltimore is not new—it was inherent in the founding of our institutions and in countless initiatives in the decades since. But over the past year, we've been inspired by the ways you have thought anew about our connections to Baltimore and aligned your work with the health of this city.

We have shared some of these efforts previously:

Internally, we've also come together in new ways over the past year. At Johns Hopkins Medicine, dozens of departmental meetings immediately after the unrest led to the creation of seven task forces, focused on areas ranging from employment to trust building to facilities. JHM leadership and community partners reviewed proposals emerging from that work, and are now moving forward with plans in areas such as jobs programs and after-school services. At Homewood, a protest led by our Black Student Union called on Johns Hopkins' administration to more deeply address the disparities felt by underrepresented minorities—students, faculty, and staff—across the university. The resulting Roadmap on Diversity and Inclusion will help ensure that our commitment to equity starts on our own campuses.

As gratified as we are by the efforts undertaken by our extraordinary, committed community, it is clear that our work is not yet complete.

When the eyes of this nation turned to Baltimore last year as protests erupted in our streets, we were forced to reckon with what had, truthfully, been hidden in plain sight for a very long time. The long-standing challenges of this city—the painful and aching disparities in health and opportunity—appeared as acute afflictions, and urgency steered our collective efforts. We must not lose that sense of urgency.

In the days, weeks, and months ahead, we encourage you to find new ways to engage with this vibrant and resilient city, whether you host a high school intern through our summer jobs program, dedicate your research to understanding the inequities and urban challenges around us, or take time to learn more about the neighborhoods of Charm City. It will take the energy and commitment of people across Baltimore to overcome the challenges and injustices we've seen; thank you for helping us do our part.