No. 17 Blue Jays score 13-12 victory in front of Homecoming crowd

The Johns Hopkins men's lacrosse team held on for a Homecoming win against Ohio State on Saturday, getting three goals from senior Ryan Brown in a 13-12 win against the Buckeyes at at Homewood Field. 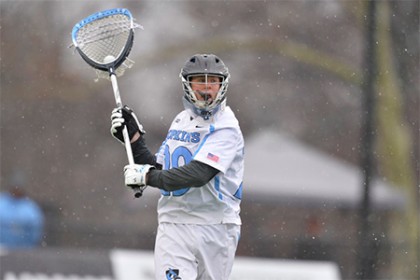 The game started in a snow squall, finished in bright sunshine, and saw the return of Hopkins coach Dave Pietramala to the sideline after he had missed four games with an infection in his back. When it was over, the No. 17 Blue Jays (6-4, 1-1) had their first Big Ten Conference win of the season and improved in 15-1 in Homecoming games under Pietramala.

Hopkins built at 8-5 halftime lead and pushed its advantage to 10-6 early in the third quarter, but the Buckeyes (5-7, 0-2) used a three-goal run to get back into the game and closed to within a goal on four occasions before falling short. After combining for 10 goals in the third quarter, each team managed just one goal in the final period.

Johns Hopkins returns to action Sunday at Penn State at 7 pm. The game will be televised by the Big Ten Network.