David Peters, chair of the Department of International Health at the Johns Hopkins Bloomberg School of Public Health and an expert in the improvement of health systems performance, has been appointed director of Johns Hopkins' Global Health Signature Initiative. 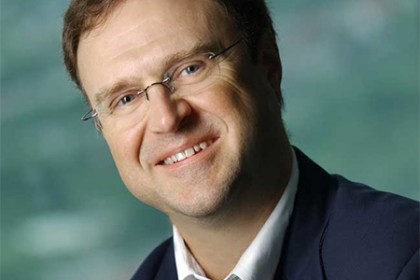 Peters will work with faculty, staff, and students from across the institution to address pressing health issues around the world.

"At Hopkins, we have the opportunity to bring together the best scientific and creative minds to collaboratively address health inequities," Peters says. "This initiative will mobilize and consolidate our expertise in order to address these complex problems facing the world's most disadvantaged people."

The Global Health Signature Initiative, part of the Rising to the Challenge capital campaign, works to bring together scholars from public health, medicine, nursing, engineering, economics, public policy, and beyond to develop lifesaving solutions in such areas as food and nutrition security, counterfeit and substandard drugs, antimicrobial resistance, and universal health coverage. The signature campaign initiatives, in tandem with the Bloomberg Distinguished Professors, are part of a coordinated effort to leverage and strengthen divisional expertise to create solutions for the most critical global issues.

Peters will begin his new role by consulting across the Johns Hopkins community to identify the institute's thematic areas of focus. He will work in partnership with government, civil organizations, and fellow academic partners to identify needs in the global community and expand the capacity to find comprehensive solutions to seemingly intractable problems.

"With David's exceptional record of leadership, research, and collaboration, we are confident this initiative will produce innovative lifesaving approaches and strategies," says Denis Wirtz, vice provost for research and administrative director of the signature initiatives. "As a field requiring truly interdisciplinary solutions, we are especially looking forward to witnessing the ways it is integrated throughout our divisions."

In 2009, he assumed leadership of the Bloomberg School's Health Systems Program, became associate chair of International Health, and was named department chair in 2013.

Over the last two decades, Peters has worked in health systems as a researcher, policy adviser, educator, manager, and clinician in dozens of developing countries. He was one of a dozen U.S. health workers selected in October 2014 to stand with President Obama when he praised health care heroes serving on the front lives of the Ebola epidemic. Peters had led an international group of experts from the schools of Public Health, Nursing, and Medicine to re-focus the outbreak strategy on community-based, integrated responses, contributing to a quicker end to the epidemic in Liberia.

Previously, Peters pioneered the development of the Sector Wide Approaches in health, with the purpose of improving national leadership and coherence over health strategies, and improving coordination and accountability of policy implementation. In India, he led a research program with local researchers, government, and civil society to examine health systems and inequities, which became the basis for the Rural Health Mission and policies to improve access and financing for health care. And in Afghanistan, he created the first nationally implemented Balanced Scorecard to assess and manage health services, and conducted research that directly led to the end of user fees in primary care facilities.