For the third year in a row and the fourth time in the past five years, the annual regular-season men's lacrosse game between Johns Hopkins and Virginia ended in overtime. For the third consecutive year, it was the Cavaliers who came out on top, as Mike D'Amario's goal just 19 seconds into the extra session was the difference in a 13-12 Virginia victory Sunday afternoon in Charlottesville, Virginia. 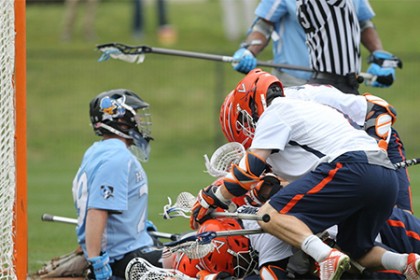 In a back and forth game that featured six ties, the Cavaliers (4-5) erased fourth-quarter deficits of 10-9, 11-10, and 12-11, and Greg Coholan's goal with 20 seconds remaining forced overtime. There, Virginia's Zed Williams came up with possession on the opening faceoff before working the ball to D'Amario on the wing. D'Amario got inside his defender from the side and scored while diving at the crease to give the Cavs the victory.

The No. 8 Blue Jays (4-3), winners of three games in a row, scored the game's first four goals and rallied from a two-goal third-quarter deficit to lead late. Shack Stanwick, Wilkins Dismuke, and Holden Cattoni each scored twice for Hopkins, and goalkeeper Brock Turnbaugh made nine saves.

Johns Hopkins returns to action Wednesday at UMBC at 7 p.m.