A leading global public health commission is calling for new policies that would transform our approach to drug use, addiction, and control worldwide, including the decriminalization of minor and non-violent drug offenses.

According to a report released this morning by the Johns Hopkins Bloomberg School of Public Health and The Lancet, the war on drugs and zero-tolerance policies have undercut public health across the globe and have directly contributed to many of today's most urgent public health crises while doing little to affect drug markets or drug use.

"The goal of prohibiting all use, possession, production, and trafficking of illicit drugs is the basis of many of our national drug laws, but these policies are based on ideas about drug use and drug dependence that are not scientifically grounded," says commissioner Chris Beyrer, an epidemiology professor at the Bloomberg School. "The global war on drugs has harmed public health, human rights, and development. It's time for us to rethink our approach to global drug policies, and put scientific evidence and public health at the heart of drug policy discussions."

"It's time for us to rethink our approach to global drug policies and put scientific evidence and public health at the heart of drug policy discussions."
Chris Beyrer, Bloomberg School of Public Health

The Johns Hopkins University–Lancet Commission on Public Health and International Drug Policy calls for worldwide reform of drug policies, including:

The report is based on an extensive review by the commissioners of the published evidence, and on original analyses and modeling on violence, incarceration, and infectious diseases associated with drug policies.

"The idea of reducing harm is central to public policy in so many areas, from tobacco and alcohol regulation to food or traffic safety, but when it comes to drugs, standard public health and scientific approaches have been rejected," says commissioner Joanne Csete of the Mailman School of Public Health at Columbia University. "Worse still, by dismissing extensive evidence of the health and human rights harms of drug policies, countries are neglecting their legal responsibilities to their citizens. Decriminalization of non-violent minor drug offenses is a first and urgent step in a longer process of fundamentally re-thinking and re-orienting drug policies at a national and international level. As long as prohibition continues, parallel criminal markets, violence, and repression will continue."

The commission found that harsh drug control policies actually increase the risk of death from overdose by restricting access to many medications, such as naloxone, that can quickly reverse overdoses. Opioid overdoses are currently at an all-time high in North America.

The commission also found that the enforcement of drug control policies undermines the well-being and health of the drug users and the communities the policies are meant to protect. The policing of needle and syringe programs and the incarceration of individuals for minor drug offenses and violations of drug paraphernalia laws have led to the continued growth of unsafe injections, contributing to the spread of HIV, hepatitis C, and tuberculosis worldwide. Further, mass incarceration of African-Americans and Hispanics for non-violent drug crimes has led to deterioration of families and communities.

"Approximately 11 percent of people who used illicit drugs worldwide are classed as problematic drug users," says commissioner Adeeba Kamarulzaman, professor and dean at the University of Malaya School of Medicine in Kuala Lumpur, Malaysia. "But the idea that all drug use is necessarily 'abuse' means that immediate and complete abstinence has been seen as the only acceptable approach. In countries and regions where opiate substitution therapy remains unavailable or is not provided to scale, HIV and hepatitis C epidemics continue to expand. Furthermore, continued criminalization of drug use fuels HIV, hepatitis C and tuberculosis transmission within prisons and the community at large. There is another way. Programs and policies aimed at reducing harm should be central to future drug policies."

The war on drugs has also led to the increase in violence in Central America and Mexico. According to the commission, homicides in Mexico have increased so much since military forces began policing drug traffickers in 2006 that life expectancy in the country has been reduced. This violence has led to a surge of Central American refugees crossing the United States' southern border.

The commission calls for governments to take an evidence-based approach to drug policy. An increasing number of national, state, and local governments and jurisdictions are introducing legally regulated markets of marijuana. The commission urges governments and research bodies to use these regulated markets for rigorous scientific research and evaluation so best practices for public health and safety can be identified and emulated. 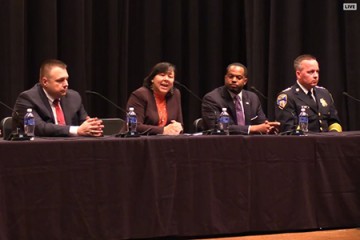 The future of policing