Midfielders DiMartino, Schweizer hope to lead JHU back to the NCAA tournament for the third year in a row 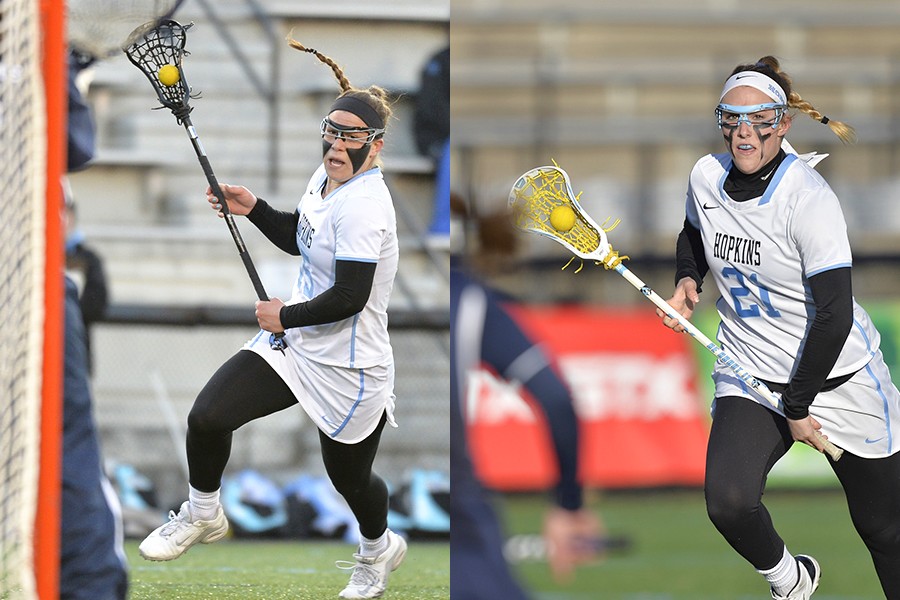 As a high school senior, Haley Schweizer attended several Johns Hopkins women's lacrosse games to support her older sister Courtney, a midfielder for the Blue Jays. Schweizer says the team's play impressed her, in particular then-freshman Dene' DiMartino, a former Under Armour All-American from Long Island who tallied 35 goals her first season en route to being named the American Lacrosse Conference's Rookie of the Year. DiMartino, Schweizer says, had this impeccable ability to dodge and weave around opponents, making some look rooted to the ground.

"I was like, 'Wow, she is so good,'" says Schweizer, recalling watching DiMartino, a 5-foot-6-inch powerhouse of a midfielder who conspicuously wore monstrous eye black triangles on her cheeks, an adornment that would put Ray Lewis's and Bryce Harper's to shame. "I honestly looked up to her so much. I said, 'I want to be like that and play like her.' I pictured this girl who was so above me, something I'm striving toward."

Schweizer says her sister called DiMartino "the real deal," and someone she'd be lucky to call a teammate if she came to Johns Hopkins and made the team. She did both.

Now a junior, Schweizer still idolizes DiMartino's game, but instead of watching her from the stands, she shares the same field, victories, accolades, and, yes—eye black.

"Haley and Dene' tend to look for and feed off each other. They're both gazelles out there who love to play, and it shows."
Janine Tucker, JHU head coach

The two teammates, and roommates, have become inseparable, forging a special chemistry on and off the field. Schweizer and DiMartino form the dynamic core of a Blue Jays' attack that has led Johns Hopkins women's lacrosse to consecutive NCAA tournament appearances and a 7-3 record so far this season. Johns Hopkins enters its final stretch of games ranked in the top 20 in all three national Division I polls.

As Schweizer and DiMartino go, so does the offense.

DiMartino also leads the team in draw controls (53), including a record 10 on March 16 in a 12-11 victory over Vanderbilt. What she lacks in size, DiMartino makes up for in desire and leverage, as she regularly outleaps her opponents and manages to knock the ball back to herself or teammate Emily Kenul.

Earlier this season, Schweizer and DiMartino were among 50 women's lacrosse players named to the watch list for the Tewaaraton Award, which annually honors the top male and female college lacrosse player in the nation. The judges thought both JHU stars could build on strong 2015 campaigns—DiMartino earned third team All-America honors a year ago while leading Hopkins in points (52), goals (40), and draws (58); and Schweizer garnered second team all-region honors, ranking second on the team in several statistical categories.

"Haley and Dene' tend to look for and feed off each other," Tucker says. "They're both gazelles out there who love to play, and it shows."

DiMartino comes from Long Island, New York, a hotbed of lacrosse. In high school, she led her team to a county championship her senior year and was a three-time US Lacrosse All-American and a member of USA U-19 training squad. A multi-sport star, she played basketball and soccer, earning all-league honors three times in each. However, lacrosse was her passion, and when it came to choosing a college, DiMartino says she put a lot of stock into the winning tradition Tucker was building.

"I visited other schools, but JHU was always the top," she says. "I remember my parents telling me that there are too many pros, you have to go here. Great academics, plus it's closer to home, and my dad has always gone to all my games. He's crazy. He comes down here and goes home right after."

"She would always wear lots of face black, and I wanted to do everything she did," DiMartino says. "She didn't do triangles, so I wanted to try something different, and it stuck with me ever since."

DiMartino says that when she joined Johns Hopkins, she hesitated at first to continue with her face painting, but Tucker encouraged her to keep the look. "She told me, 'You did this in high school and had success. You can't change now,'" she says. "I decided I just have to own it. If anything, I think they've gotten bigger over the years."

On the field, DiMartino bosses both the game and squad. She's not afraid to tell a teammate to cover someone or bark a "c'mon" or "here we go" when needed. She has twice been voted team captain by her teammates, who affectionally call her Dino. Tucker says DiMartino has become a role model for the other players, who notice her work ethic, how she overpowers opponents bigger and faster than her on draws, and how she outlasts everyone with her superb fitness.

"Dene' is a fun kid, but she also has this rip-your-face-off intensity," Tucker says. "She's fierce and competitive on the field, but in the locker room she's quiet and confident. She values her captain's role and has earned everyone's respect."

Tucker says Schweizer has a similar tenacity and attention to detail, and a mutual respect for DiMartino's game initially brought the two together, before they became good friends and roommates.

Schweizer, a two-time US Lacrosse First Team All-American in high school and the Delaware Player of the Year as a senior, started her Johns Hopkins career on defense, but at the urging of the team's coaching staff, worked hard on her offensive game in the summer after her freshman year and lobbied for a starting spot in midfield, which she secured and held onto.

At 5-foot-10-inches, Schweizer is a force. She played basketball and field hockey in high school, and she doesn't shy from contact. She often rampages toward goal, almost out of control and inviting contact every step of the way, but somehow managing to maintain possession and get off a shot.

"I've always embraced pressure and contact on the field, maybe it comes from being a middle child of [six siblings]," Schweizer says. "I'm not afraid to get hit or knocked around. Once I start, I'm not going to stop."

As evidence, in a game against Boston University that started a four-game winning streak for the Blue Jays, Schweizer got knocked down on her way to goal, only to score from her knees late in the second half, securing a victory.

"Haley has been a force since her freshman year," Tucker says. "She's just a pure athlete and loves being a lax player. I've watched her grow in poise and confidence since she's got here. I think last year she realized just how much stronger and faster she is than most other players. She's fearless when a game is on the line."

Tucker says Schweizer is also the team's unofficial cheerleader, and she leads the Blue Jays in on-field celebrations. When another player scores, Schweizer leaps to her feet and kicks out her legs before joining a celebratory huddle. She's not sure where her flourishes come from.

"It just happens. I know, I do the weirdest jumps. They just spring up," she says. "I've always been goofy and happy, like my siblings, embracing the good things that come our way. Plus, especially when you're down, one goal means a lot. I know from being a freshman, seeing other people celebrate for me meant a lot. It gives you so much confidence. I want to motivate others."

Tucker says Schweizer has an infectious spirit—she's the first to lead a dance party in the locker room. "Her joy is contagious," Tucker says. "Although I'm worried that when she jumps 12 feet in the air she's going to come down and hurt herself."

When Schweizer joined the Blue Jays midfield her sophomore year, DiMartino encouraged her to don the eye black. "She told me it's a middie thing," she says.

With triangles taken, and fellow midfielder Cannon with vertical lines, Schweizer adopted two lines across each cheek connected by a long streak, resembling an "F." Schweizer jokes that she tells some people the "F" stands for fearless. Tucker, who enjoys the players' war paint tradition, says it could easily stand for fierce.

After graduation, both see a life in medicine. DiMartino, a public health major, is applying to nursing schools and has her eyes set on pediatrics. Schweizer, a psychological and brain sciences major, wants to follow in her sister's footsteps and become a physician's assistant, likely in the field of orthopedics or emergency medicine.

But right now they're all about school and lacrosse. They both love to talk strategy, and their conversations often descend into game chatter, dissecting what went wrong or what they could do better. They're also prone to pop in game film when the moment strikes. "If you were in our apartment after a game you'd probably run away," Schweizer says. It's nonstop lacrosse.

"We're really so similar," she adds. To which DiMartino replies, "Yeah, we're both weird."