The Johns Hopkins men's lacrosse team overcame a two-goal deficit with two and a half minutes to play against No. 3 Syracuse on Saturday afternoon, then got the decisive goal from junior Wilkins Dismuke in overtime for a dramatic 11-10 victory at Homewood Field. 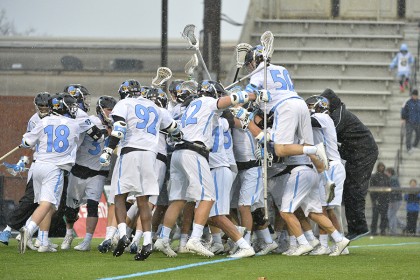 It was the third consecutive win for the No. 8 Blue Jays (4-2) and their second in a row against a top-10 opponent. JHU played without head coach Dave Pietramala, who missed the game due to an infection in his lower back.

Hopkins fell behind 4-0 in the first quarter and never led during regulation, but the Blue Jays chipped away at the Orange's lead with a balanced attack that featured goals from six different players. Cody Radziewicz led the way with three scores, including two third-quarter goals that helped JHU erase a 7-4 halftime deficit.

Syracuse (5-1) turned an 8-8 tie into a 10-8 lead, but the Blue Jays got an unassisted goal from junior John Crawley with 2:22, and senior Ryan Brown netted the equalizer with 38 seconds to play on a feed from sophomore Shack Stanwick. That set the stage for Dismuke's game-winner, which same on a rebound after a save by Syracuse goalie Warren Hill.

Dismuke, Drew Supinski, and Patrick Fraser all scored twice for the Blue Jays.

The Orange owned a 26-18 advantage on ground balls and outshot Hopkins 36-26, but JHU goalkeeper Brock Turnbaugh kept his team in the game with 10 saves.

Hopkins returns to action Sunday when it faces No. 17 Virginia at 1 p.m. in Charlottesville, Virginia.