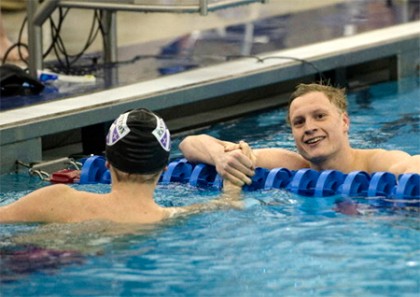 Greenhalgh sat just behind eventual runner-up Arthur Conover of Kenyon for the first 400 yards before edging ahead for the first time between the 400 and 450-yard marks. He finished in 4:21.83, the second-fastest time in school history and .86 seconds ahead of Conover. In winning the 2015 title, Greenhalgh set an NCAA record with a time of 4:20.60.

On the women's side, Hopkins sits in 12th place with 21 points of the first day of competition. Sophomore Kaitlin Jones placed ninth in the 200 IM, winning the consolation final in 2:03.49.

The competitions run through Saturday at the Greensboro Aquatic Center.