Six months ago, Johns Hopkins announced the HopkinsLocal initiative , a commitment to promoting economic growth and employment opportunities in Baltimore through its own purchasing, building, and hiring efforts.

The initiative includes three major areas of focus: increasing design and construction contracts with local minority- and women-owned businesses, building relationships with more city-based vendors, and expanding the number of new hires that come from city's most distressed neighborhoods.

"The more people in our communities who are gainfully employed, the stronger the community can be."
Yariela Kerr-Donovan
Johns Hopkins Health System

Hopkins hosted representatives from local faith-based and community-focused organizations Monday to share more information about the hiring aspect of the initiative, an effort dubbed HireLocal.

The goal of the hiring program is for 40 percent of people hired for certain entry-level positions to come from 16 select ZIP codes—neighborhoods immediately surrounding Johns Hopkins campuses, as well as Baltimore neighborhoods with high poverty and unemployment.

As of 2014, 29 percent of new hires in those select positions at Johns Hopkins University were residents of targeted neighborhoods. In the Johns Hopkins Health System, that figure was 32 percent.

"The program is a win-win for everyone: for our institution and for our community," said Yariela Kerr-Donovan, director of strategic workforce planning and development for the Johns Hopkins Health System. "The more people in our communities who are gainfully employed, the stronger the community can be."

The categories of jobs targeted by the program include custodial, food service, maintenance, and administrative positions. These jobs were selected because they offer the potential for career growth and typically have high volumes of recruitment, program organizers said.

Many of the agencies that attended Monday's meeting work one-on-one with job seekers in distressed communities. These organizations include the Central Baltimore Partnership, Baltimoreans United in Leadership Development, the Baltimore City Mayor's Office of Employment Development, and The Urban League.

Laurence Moore from the Baltimore City Department of Social Services said he already has candidates in mind for HireLocal, and that he is optimistic for the success of the program because of the success of previous partnerships between the DSS and Hopkins.

"We have a five-month internship program that's working well—in the three years it's been running, we've placed 200 interns in jobs," he said.

Some of the agencies represented Monday work with applicants who have particular needs, specifically refugees and job seekers with criminal records who are re-entering the workforce. Heidi Conway, vice president for human resources for the university, said that there are systems in place to accommodate these kinds of recruits, including equivalency tests for refugees who do not have documentation of their qualifications.

Bonnie Windsor, senior vice president for human resources for the health system, underscored that the HireLocal program, like traditional Johns Hopkins recruitment, will not disqualify applicants with criminal backgrounds.

"It's very individual," Windsor said. "We don't have rules that say 'we will not hire someone who has X.'"

Hopkins has partnered with Humanim, a human services and workforce development nonprofit, to streamline the recruitment process. Elements of the HireLocal program are already in place, and qualified candidates for the targeted positions are encouraged to apply now. Qualified candidates for other jobs not targeted by HopkinsLocal may continue to apply through traditional recruitment methods.

Getting the word out to community partners is essential to the success of the HopkinsLocal hiring effort, said Affan Sheikh, associate for strategic initiatives for Johns Hopkins University.

"We have been eager to host our community and faith-based partners to discuss the local hiring components of HopkinsLocal in detail," he said. "We understand the critical role that these partners will play to help us meet our ambitious hiring goals." 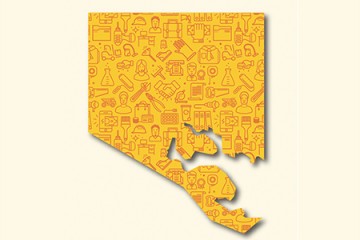