The Johns Hopkins men's lacrosse team clawed back from an early deficit to take its first lead in the fourth quarter on Sunday afternoon, but a late spurt lifted North Carolina to a 15-11 victory at Homewood Field. 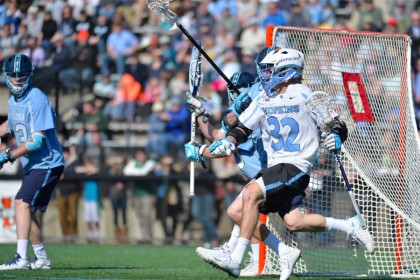 No. 8 Hopkins (1-2) fell behind 4-0 in the first quarter of its home-opener but chipped away and took its first lead, 11-10, on a goal by sophomore Shack Stanwick with 11:22 to play. But the No. 10 Tar Heels (3-1) seized the momentum, scoring the game's final five goals to secure their fifth consecutive victory against JHU.

Stanwick paced the Blue Jays with two goals and a career-best five assists, and senior Ryan Brown added three goals and an assist. Cody Radziewicz had a pair of goals for JHU, and goalkeeper Brock Turnbaugh had eight saves.

Hopkins returns to action Saturday when it hosts Princeton at 1 p.m.