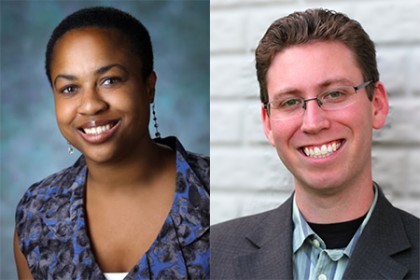 The award, announced by President Barack Obama, is the U.S. government's highest honor for scientists and engineers in the early stages of their independent research careers. The winners will receive their awards at a ceremony in Washington, D.C., this spring.

"These early-career scientists are leading the way in our efforts to confront and understand challenges from climate change to our health and wellness," Obama said. "We congratulate these accomplished individuals and encourage them to continue to serve as an example of the incredible promise and ingenuity of the American people."

Bumpus, 35, studies drug metabolism, the process by which proteins that are primarily present in the liver biochemically modify a drug that a person is taking. How the drug is metabolized determines both the duration and intensity of the action of the drug and plays a major role in mediating differences in how individuals respond to the same drug.

Bumpus's lab works to define the details of how drugs used to prevent and treat HIV infection are metabolized, and also to determine whether genetic differences between people might play a role in observed differences in drug efficacy. The team's goal, she says, is to help physicians choose the right drug at the right dose for a given patient by leveraging the knowledge of the molecular details of how these drugs are metabolized.

"I am humbled and motivated to continue working hard toward the research goals of my lab," Bumpus said via email of being chosen for a Presidential Early Career Award.

Added Mark Anderson, director of the Department of Medicine: "Since joining Johns Hopkins in 2010, Namandje has made tremendous progress toward ultimately making HIV treatment more personalized and effective. This is a well-deserved recognition of her work, and I look forward to seeing how she will continue to advance the field."

Green, 34, studies biomaterials, drug delivery, gene therapy, and cell engineering. His research includes using tiny, biodegradable particles to teach the immune system to recognize and eliminate cancer cells. His work has also led to improvements in the prolonged, time-delayed release of drugs and other therapeutic agents, leading to to promising laboratory results related to macular degeneration and cancers of the skin, liver, and brain.

"Jordan's innovations and productivity are exceptional, and his findings have very exciting implications for patients," says Leslie Tung, interim director of the Department of Biomedical Engineering. "He is truly an extraordinary and exemplary early-career scientist, and a wonderful colleague as well."

The awards, established by President Bill Clinton in 1996, are coordinated by the Office of Science and Technology Policy within the Executive Office of the President. Awardees are selected for their pursuit of innovative research at the frontiers of science and technology and their commitment to community service as demonstrated through scientific leadership, public education, or community outreach.