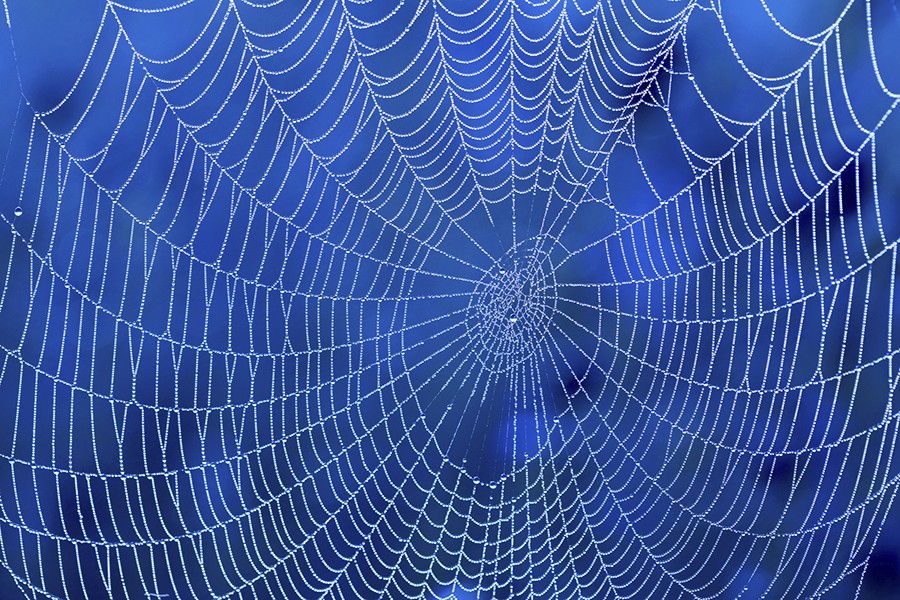 Biophysicists at Johns Hopkins University have discovered one of the keys to the super-elasticity of spiders' webs, finding that proteins in the silk used to make the webs act like supersprings and can stretch to five times their initial length.

The investigators are working on a tool that measures the pushes and pulls sensed by proteins in living cells, a tool that will shed light on many biological events, including the shifting forces between cells during cancer metastasis. Details of their research were published online in the journal Nano Letters on Feb. 5.

"All other known springs, biological and nonbiological, lengthen in a way that is directly proportional to the force applied to them only until they have been stretched to about 120 percent of their original length," says Taekjip Ha, the study's lead researcher. "At that point, you have to apply more and more force to stretch them the same distance as before. But the piece of spider silk protein we focused on continues to stretch in direct proportion to the force applied until it reaches its maximal stretch of 500 percent."

Ha, a Bloomberg Distinguished Professor of biophysics and biophysical chemistry at the Johns Hopkins University School of Medicine, says the discovery came during follow-up to research he and his team—then at the University of Illinois at Urbana–Champaign—described in the journal Nature in 2010, work done in collaboration with cell biologists led by Martin Schwartz, then at the University of Virginia.

The Virginia team inserted a repeating amino acid sequence taken from the spider silk protein known as flagelliform into a human protein called vinculin. Using fluorescence microscopy, the scientists were able to watch the forces acting on vinculin in live cells in real time. Ha's team helped translate what was seen under the microscope into measurements of force.

The team wasn't expecting the spider silk inserts to show such linear behavior because, according to Ha, they don't form well-defined, three-dimensional structures.

"Usually, unstructured proteins show disorderly, nonlinear behavior when we pull on them," says Ha. "The fact that these don't act that way means that they will be really useful tools for studying protein mechanics because their behavior is easy to understand and predict."

Already, Ha says, the flagelliform insert from the previous research has been used to study many biological phenomena, including the shifting forces between cells during cancer metastasis and the pushing and pulling of cells during the development of simple, multicelled organisms, like worms.

"Tension is important for many activities inside cells," Ha says. "Cells sense mechanical forces in their environments and change their behaviors and functions in response. Now we have a way to watch and understand these forces and how they are transmitted at a molecular level in living cells."