University's chief academic officer since 2013 will return to his scholarly research on issues of race, inequality

Robert C. Lieberman, who has served as Johns Hopkins University's provost since 2013, has decided to step down from his role as the university's chief academic officer at the end of the academic year, returning full-time to the faculty to pursue his acclaimed research and scholarship on issues of race and inequality. 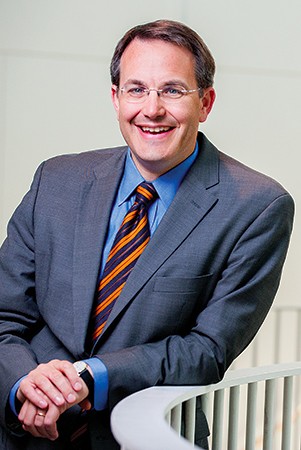 Lieberman will be appointed as the Krieger-Eisenhower Chair in JHU's Krieger School of Arts and Sciences and will work in close collaboration with the university's 21st Century Cities Initiative on issues of inequality and race in the United States and around the world.

"At a moment when issues of race are at the fore in America, and resounding especially in cities like Baltimore, it is not surprising that Rob is eager to return to his writing, teaching, and speaking in this area," JHU President Ronald J. Daniels wrote today in a message announcing Lieberman's shift in focus.

Over the last three years as provost, Lieberman has played an active role in strengthening governance and academic decision-making at JHU, and his scholarly expertise have made him a natural advocate for the role and value of diversity. He conceived the highly successful JHU Forums on Race in America, led the development of the recently announced Faculty Diversity Initiative—a five-year program designed to bring outstanding under-represented and minority faculty to Hopkins—and worked to enhance the university's practices and accountabilities around equity issues.

Lieberman has implemented the Bloomberg Distinguished Professorships, drawing in 19 renowned faculty members whose cross-disciplinary endeavors touch nearly every corner of the university. He also led the development of the Catalyst and Discovery awards, which reward innovative early-career research and distinguished cross-divisional research collaborations, and the President's Frontier Award, a $250,000 award given annually to a faculty member who demonstrates significant scholarly achievement and shows exceptional promise for important future work.

"It has been a privilege to serve Johns Hopkins as provost, and I am thankful for the opportunity," Lieberman said. "I am excited to be continuing my scholarly career here and look forward to the opportunity to work even more closely with students and faculty colleagues."

Lieberman was selected as Johns Hopkins University's 14th provost in April 2013 and assumed the role in July of that year. Previously, he served as interim dean of School of International and Public Affairs at Columbia University, where he had been a member of the faculty since 1994.

Lieberman is a well-known scholar on issues of race and politics in America, social welfare policy, and the welfare state. A 1986 graduate of Yale University, he received his doctorate in political science from Harvard University in 1994. His first book, Shifting the Color Line: Race and the American Welfare State, won prizes including the 1999 Lionel Trilling Book Award for the best book by a Columbia faculty member. He has since published Shaping Race Policy: The United States in Comparative Perspective, and co-edited a Johns Hopkins University Press title, Democratization in America: A Comparative-Historical Analysis.

Lieberman will complete his term as provost on June 30, then take a six-month sabbatical to pursue his scholarly work before assuming teaching duties in the Department of Political Science. A committee will be formed to search for the university's next provost, Daniels wrote.

"We are all enormously grateful for Rob's service to the university," Daniels said. "I want to express my profound appreciation for his wise counsel and commitment to this university and the people within it, and my great delight that the next phase of his career will be here with us."