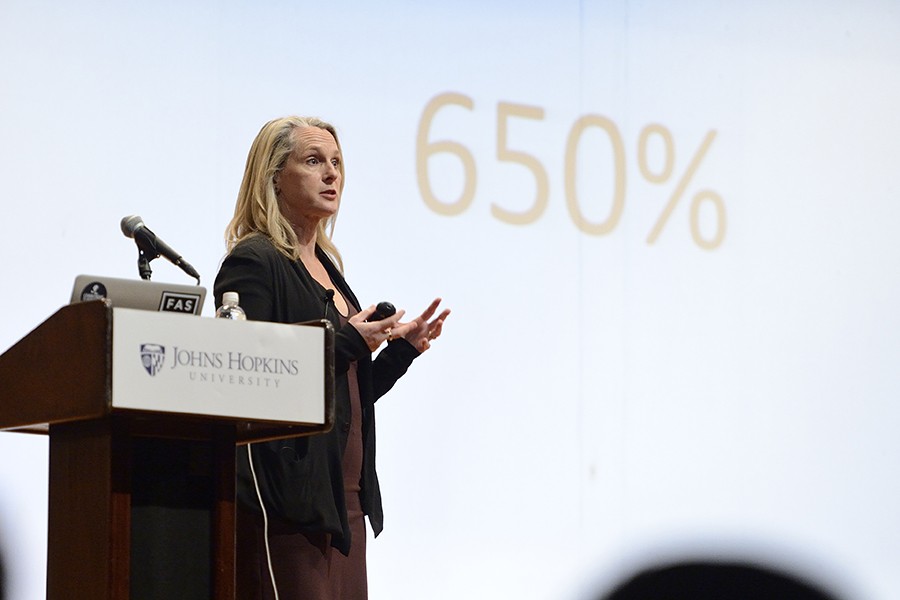 "Female incarceration offers an everyday example of our commitment to harsh punishment in this country," author and activist Piper Kerman declared during her lecture on prison reform Wednesday night at Johns Hopkins University. The Shriver Hall event was delivered as part of the Foreign Affairs Symposium, the annual speaker series founded in 1998 and run by JHU students.

Kerman's talk centered on female incarceration and the havoc wrought by mandatory minimum sentencing for crimes, specifically minor drug infractions. "Most of the women we choose to lock up are not there for heinous or serious or violent crimes, but rather for very low-level offenses," she said.

Kerman authored the memoir Orange Is the New Black: My Year in a Women's Prison about the 13 months she spent locked up for her involvement in drug money trafficking. Called by The Los Angeles Times "impossible to put down," the book was later adapted into an award-winning original series of the same name for Netflix by Jenji Kohan.

The vast majority of female inmates are being held for drug offenses or property crimes, to which Kerman argued "we have to figure out what purpose we expect detention to have in holding individuals accountable for their crimes and also in making everyone else safe."

Kerman's unshakable coolness in the spotlight and the conversational way in which she delivered the lecture did not prevent her from discussing the deep emotional conflicts she experienced while in prison. As she got to know her fellow inmates—many women whose lives had been ravaged by addiction and the drug trade—she was forced to face her own participation in the trade of narcotics, and the role she played in perpetuating addiction.

During her sentence, she also witnessed the racial and class-related inequities of the criminal justice system. "It was impossible, after my year in prison, to draw the conclusion that those women's crimes were so much worse than my own to warrant the harshness of their sentences," she said. People of color are funneled into the criminal justice system at a vastly disproportionate rate, she said, which shouldn't surprise anyone.

What's more, she said, the harsh sentencing practices in the U.S. influence other nations. "American policy drives policy outside our borders," she said. "All around the world, women are the fastest growing population in other prisons as well."

During the question and answer portion of the evening, students expressed concern about an inmate's transition from prison back into society. Kerman suggested ways for students to be involved, conceding that inmate tutoring can have high demands on a student's time, but suggesting that organizing donation drives for school supplies for the children of incarcerated women could make a huge impact on families in the criminal justice system.

Kerman was the first speaker in the six-event spring series, which continues Feb. 17 with Edward Snowden as the featured speaker.

"We were looking for someone who would have a different point of view and a different opinion on the prison system," said Alex Sadler, an international studies major and one of the executive directors of the student-run symposium. "Keeping in mind our theme of 'Architects of the Future,' we thought that Piper not only writes differently, but she has really unique and fresh ideas. That, combined with her pop culture popularity, brought in a diverse crowd for the symposium."

Kerman serves on the board of the Women's Prison Association and has testified twice before Congress on the subject of solitary confinement as well as other issues within the American penal system. For her advocacy work, Kerman received the 2014 Justice Trailblazer Award from the John Jay College of Criminal Justice. She currently works as a writing teacher in two correctional facilities in Ohio, where she lives with her husband Larry Smith.