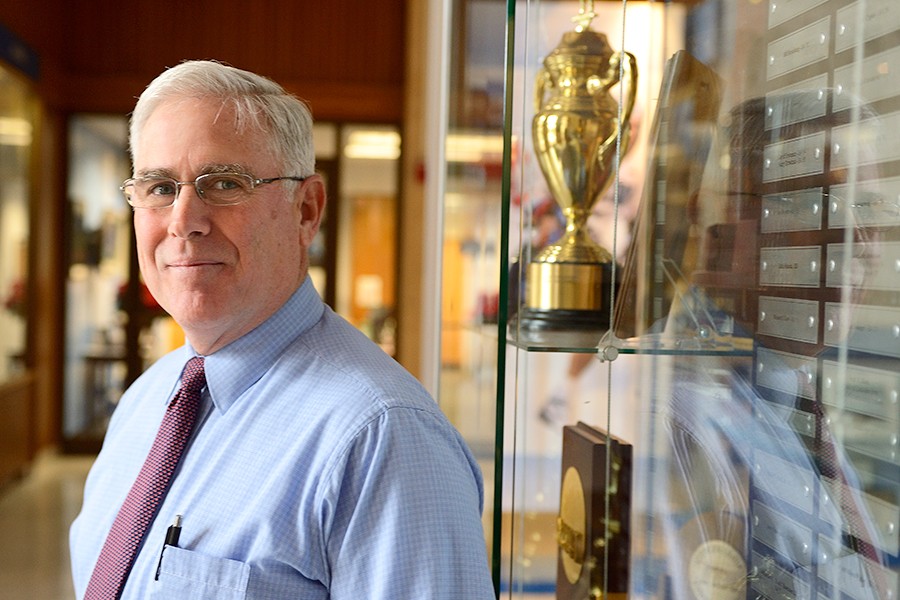 Image caption: Tom Calder joined the Johns Hopkins athletics department in 1988 and has been director of athletics since 1995.

Johns Hopkins University Director of Athletics Tom Calder announced today that he will step down this summer from the position he has held for more than 20 years.

Calder, who became JHU's athletics director in July 1995 after seven years as associate director, has accepted a position as Director of Alumni Programs in the university's Office of Development and Alumni Relations. In his new role, which he will assume in July, Calder will work to enhance alumni outreach and provide leadership and direction to all alumni relations programs, projects, and initiatives.

"I have thoroughly enjoyed my 28 years working in athletics at Johns Hopkins University and I owe a lot to the university for what it has done for me both personally and professionally," Calder said. "Moving into alumni relations and development will enable me to help Johns Hopkins in many ways. I look forward to this positive change in my career and I am excited about what the future holds."

Calder succeeded Bob Scott as the Johns Hopkins director of athletics and has since guided a program that ranks among the most accomplished in the nation. He was honored in June, 2014 as one of four NCAA Division III winners of the National Association of Collegiate Directors of Athletics (NACDA) Under Armour Athletic Director of the Year.

Collectively, Johns Hopkins teams have won five national championships and 127 conference titles under Calder's direction, while 23 student-athletes have earned prestigious NCAA postgraduate scholarships and 107 have garnered CoSIDA Academic All-America honors. Johns Hopkins has had 91 Academic All-Americans since 2000, the eighth most among schools in all NCAA divisions. Its total of 52 since 2010 ranks fourth.

"Tom and his staff have built one of the most respected, and successful, NCAA Division III programs in the nation, all the while remaining true to the long Johns Hopkins tradition of achievement at the highest levels of competition in men's and women's lacrosse," said JHU President Ronald J. Daniels. "Under Tom, our Blue Jays have excelled as student-athletes, and he has instilled a strong culture of commitment and caring for our Baltimore community and our university. I am deeply grateful to Tom, and most pleased that he plans to remain at Johns Hopkins doing important work on the university's behalf."

Added Kevin Shollenberger, vice provost for student affairs: "Tom's accomplishments as athletic director are both remarkable and extensive. His leadership was marked by his focus on students, his tireless support of our teams, and his unwavering dedication to our university—attributes that will serve him well in his new role in alumni relations."

In addition to his support of JHU athletics programs on the field, Calder has also worked tirelessly to provide each team with the facilities necessary to compete at the highest level. In the past five years, Johns Hopkins has unveiled new baseball and tennis facilities as well as the Cordish Lacrosse Center, a state-of-the-art building that houses the men's and women's lacrosse teams. Other recent facility enhancements include the opening of the Wall-O'Mahony Student Athlete Lounge in 2012 and the installation of a $1 million video board at Homewood Field in 2011.

"His tireless efforts on behalf of our student-athletes and coaching staff, while perhaps not visible publicly, have been instrumental in our recent success and the success enjoyed by our entire department," said Jim Margraff, JHU's football coach since 1990. "As a friend and colleague, I will miss working with him on a day-to-day basis, but I am excited for him as he prepares to take on the next challenge in his career."

Johns Hopkins will conduct a national search to fill Calder's position. His successor will become just the third director of athletics at Johns Hopkins since 1973. 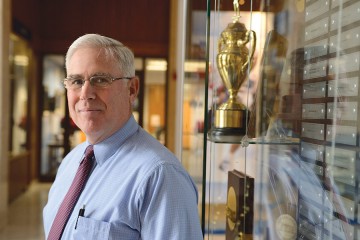