A Jhpiego health informatics advisor was rescued by French troops early Saturday following a terrorist attack at a Burkina Faso hotel where he was staying during a work trip for the global health nonprofit organization and Johns Hopkins affiliate. 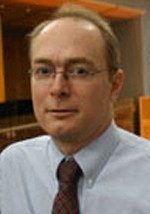 Edward Bunker, who is based in Jhpiego's Baltimore headquarters, was a guest at the Splendid Hotel in Ouagadougou preparing for his departure when the hotel, a favorite of Westerners, came under attack by militants. At least 23 people were killed in the siege, which was carried out by gunmen associated with an Islamic extremist group called Al Qaeda in the Islamic Maghreb.

Bunker was visiting the West African country to assist Jhpiego's country office with its information and data systems related to health programs.

Bunker recounted the Friday night attack in an interview with the BBC, describing the gunfire and chaotic events "like a scene out of a movie." Bunker credited Jhpiego's Global Human Resources team in Baltimore, their security consultant, and "good Wi-Fi" for getting him through the ordeal safely.

"I ended up spending the night in my bathroom with my computer and—luckily—a good Wi-Fi connection," the affable Bunker told the BBC. "I was able to get in touch with family and friends and crucially also a security consultant from my organization as well as the U.S. embassy. It was amazing how quickly the night passed, and I was thankful to have the Internet for the whole time. In fact, it was a great distraction to catch up on emails and pretend it was a normal working day."

I went downstairs to settle the bill around 20:30 and it was like a scene out of a movie with smoke, gunfire noise, explosions - but all outside of the walls. And a very, very empty and dark lobby.

I saw someone carrying a gun just outside the hotel and a burning car across the street. and that was my 'oh sh**' moment. I hid near the pool for about five minutes and figured I might just want to plan to spend the night down there.

Some cooks and kitchen staff walked by, and I made some inquires as best as I could in French. They said I should go back to my room. That was probably the best piece of advice I got that night.

Leslie Mancuso, Jhpiego's CEO and president, was kept informed of the situation until Bunker was out of the hotel. Jhpiego's global human resources staff were in constant contact with his family.

"Jhpiego is a close partner of the government of Burkina Faso, and we are terribly saddened by this tragic event and the loss of lives," said Mancuso. "Our employees are safe, and I'm extremely thankful for that. Our prayers are with the people of Burkina Faso."