After one year delay, $15M plan to improve JHU's San Martin Drive is back on track

Project to upgrade 0.9-mile road to begin in late February 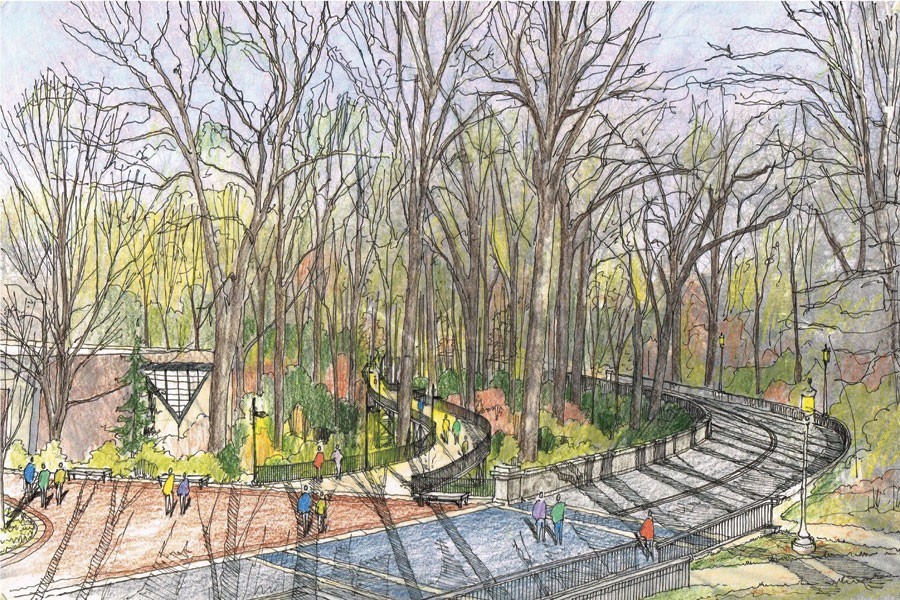 Johns Hopkins University is launching a yearlong, $15 million project to improve San Martin Drive, the scenic, tree-lined road that winds around the back of the university's Homewood campus. And if those words sound familiar, well … they should.

Exactly a year ago today, the university first announced plans to upgrade the 0.9-mile thoroughfare. The goal was to make San Martin even more attractive and, especially, to make it safer for pedestrians, runners, bicyclists, and drivers.

The work was originally slated to begin late last February. Today's announcement that the project is back in gear shifts the schedule back a year, with construction now expected to get under way next month and conclude in April 2017.

Why the delay? As the university presented details of the original project plan to on- and off-campus audiences last winter, the response was positive. But one (you'll pardon the expression) bump in the road did arise. Neighbors in the Remington Avenue area had some concerns. They were especially worried about the impact on their neighborhood of the loss of about 30 on-street public parking spaces. The spaces are at the southern end of the project zone, where San Martin Drive dead ends into Wyman Park Drive, and Wyman Park then continues to Remington Avenue.

The design calls for narrowing that stretch of Wyman Park Drive, eliminating the parking. That allows for legally required storm water runoff mitigation, including new trees and a storm water handling system.

The Johns Hopkins offices of Facilities and Real Estate and Government and Community Affairs worked with the community to address the lost parking and other issues, such as lighting, snow removal, security, and a redesigned new gateway providing a better transition between the neighborhood and the campus.

"I want to thank both the community's leaders and my Johns Hopkins colleagues who invested so much time, energy, and good will into reaching a mutually beneficial resolution," said Bob McLean, the university's vice president for facilities and real estate. "The result is an even better plan and an even better design to promote connectivity between the campus and our neighbors in Wyman Park South."

Otherwise, much of the plan is as originally announced. A San Martin Drive where some sidewalks now suddenly end and others are too narrow will instead be flanked by a continuous, up-to-standards path for those on foot. The continuous path will stretch from University Parkway, where San Martin Drive begins, south to Wyman Park Drive and then continue another tenth of a mile along Wyman Park to Remington Avenue.

There is one portion of San Martin Drive where there is now no sidewalk at all and the roadbed cannot be widened. To overcome that problem, the university will build a 36-foot-tall, 8-foot-wide pedestrian bridge, separate from but roughly parallel to San Martin. It will begin at the university's Earth sciences building, Olin Hall, and extend almost 350 feet along the west side of the roadway, heading north toward the San Martin Center (from building 55 to building 61 on this campus map).

One of the trickiest spots on San Martin, along the "S" curve at the West Gate, will become a three-way stop intersection. That will help drivers and bicyclists to see each other and properly yield the right of way to each other and to pedestrians.

San Martin Drive is owned by Baltimore City, which is giving the university permission to undertake the safety and aesthetic upgrades. The project is being paid for by the university, primarily through gifts.

How the San Martin Drive project affects you

The San Martin Drive upgrade project is divided into three phases, avoiding the need to close the entire roadway at any one time.

Drivers will always be able to access—from somewhere—the San Martin Center and garage, the Olin Hall parking lot, the Carnegie Institution of Washington building, the university's West Gate, and the Steven Muller Building and garage (headquarters of the Space Telescope Science Institute).

At various times, however—depending on which phase of the project is active—drivers may have to detour around their usual routes to those destinations.

In Phase One, from February to roughly September 2016, San Martin Drive will be closed from the South Garage entrance on Wyman Park Drive to the West Gate entrance, also known as the lacrosse gates. Only the lower entrance to San Martin Garage will be open, and that only by reaching Carnegie Way from the south, along Wyman Park Drive near the Homewood Early Learning Center. Detour signs will be posted.

The interior of campus along Bowman Drive, including Levering, Gilman, Jenkins, and Mudd halls and the Johns Hopkins Club will only be accessible from the Southwest Gate, near the South Garage.

Deliveries to the Mudd and Jenkins loading docks should be via Bowman Drive. Large trucks, depending on the construction schedule, may be able to enter at the West Gate (coming from University Parkway south on San Martin Drive).

Phases Two and Three, at either end of San Martin, will be built after Phase One, between roughly September 2016 and April 2017.

The San Martin Drive project website includes more information, including artist renderings of planned improvements and details of the phases and the detours in effect during each phase. The project team will inform the campus and local communities about detours and other important developments as they occur.