In a battle of unbeaten teams, No. 6 Johns Hopkins took all the drama out of Saturday's NCAA Division III football first-round playoff game against 19th-ranked Western New England, building a 38-0 halftime lead and cruising to a 52-20 victory at Homewood Field. 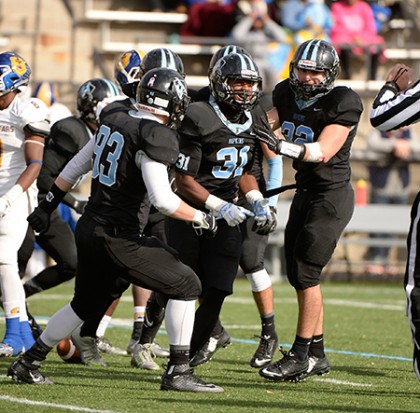 Image caption: Junior defensive back Marcus Spearman (31) had an interception and a fumble recovery, two of five turnovers forced by the Blue Jays.

The Blue Jays (11-0), who scored touchdowns on four of their first five possessions, equaled a single-season school victories with their 11th victory. Western New England finished the season with a 10-1 record.

Hopkins advanced to take on Wesley (10-1), a 42-22 winner against Framingham State on Saturday. The game will be played Saturday at noon at Homewood Field. The complete NCAA Division III playoff bracket is available at NCAA.com.

The Blue Jays defense forced quick punts by Western New England on its first two drives and the Hopkins offense answered with scoring drives of 65 and 51 yards to grab a 14-0 lead less than nine minutes into the game. A one-yard run by sophomore Ryan Carey capped the first drive, and a 13-yard touchdown pass from junior Jonathan Germano to classmate Bradley Munday polished off the second. The Blue Jays led by as many as 46 points at 52-6 midway through the fourth quarter.

Germano was 17-of-26 for 293 yards with four touchdowns, including eight completions for 132 yards and two scores went to Munday. Hopkins rolled up 535 yards of total offense with 359 through the air and 176 on the ground.

Michael Munday, Jack Campbell, and Lance Hammond tied for the team lead with six tackles each for Johns Hopkins, which caused five turnovers on the day to run its season total to 34.

Johns Hopkins and Wesley will be meeting for the third time in seven years in the NCAA playoffs. The Wolverines topped JHU 12-0 in the 2009 NCAA quarterfinals and topped the Blue Jays 29-24 in the first round two years ago.