About 20 from JHU presently studying abroad in French capital

About 20 Johns Hopkins University students studying in Paris have been confirmed to be safe in the wake of a series of deadly, coordinated terrorist attacks in the French capital late Friday, university officials said. 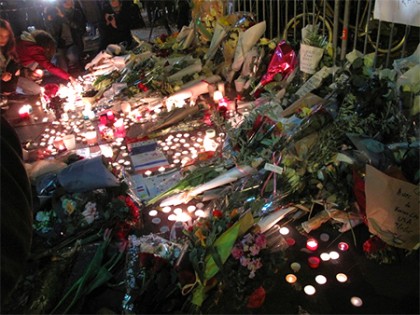 Image caption: A makeshift memorial outside the Bataclan theater in Paris, where a terrorist attack left at least 89 people dead on Friday.

That number includes 14 undergraduates in authorized study abroad programs in Paris and graduate students affiliated with JHU's School of Advanced International Studies and Krieger School of Arts and Sciences.

Lori Citti, director of the Office of Study Abroad, said that students were advised to stay at or close to home over the weekend.

"It's a very fluid and ongoing situation, and we will be monitoring the situation throughout this week," Citti said. "Johns Hopkins is not requiring at this point that students return from Paris, but we are asking that they adhere to guidance coming from their programs and from French authorities. That means remaining alert and aware of their surroundings, minimizing activities on the streets of Paris, and that they should always be in communication. We are asking that they keep their cellphones charged and keep in touch with their programs, with Hopkins, and with their families."

Authorities said at least 129 people were killed and more than 350 others injured in a series of coordinated attacks across central Paris late Friday.

Citti, who was in Paris on Friday, said the streets were quiet there over the weekend, with most public institutions closed and many people choosing to stay home. She returned to the U.S. Sunday evening.

Citti added that the Office of Study Abroad is in the process of reaching out to all Johns Hopkins students studying abroad in Europe with a general message about safety. She encouraged any parents or students with concerns to contact her directly at her office (410-516-6760) or via her cellphone (410-530-6029).