Specialists at the Johns Hopkins Children's Center have successfully treated a case of extensively drug-resistant tuberculosis in a young child, now 5.

Their report on the challenging case, published Monday in The Lancet Infectious Diseases, provides the first detailed account of diagnosing and treating a young child in the United States with the highly virulent form of tuberculosis, known as XDR TB.

The bug's resistance to most known TB drugs makes it particularly difficult to treat in anyone, but even more so in children, the Hopkins team says. Medical literature worldwide only describes a handful of cases in children younger than 5.

"We are thrilled that our patient is doing so well," says TB expert Sanjay Jain, a pediatrician at the Johns Hopkins Children's Center. "But at the same time, this is a wake-up call to the realities of TB."

Diagnosis is especially hard for children, Jain says, because they harbor fewer TB bacteria in their bodies, which can cause false negative readings. In this case, the doctors also struggled with a lack of fast, reliable diagnostic tools to track the disease and a lack of pediatric-friendly drug formulations.

The young girl was first brought to The Johns Hopkins Hospital with unrelenting fever and malaise after returning from a three-month trip to India. A chest X-ray revealed a telling clue: a suspicious lung spot. Though results of initial mucus tests came back negative, the pediatricians followed their hunch and forged ahead with preemptive treatment for TB.

"Preliminary test results are notoriously unreliable, and this case provides a perfect illustration of the need for swifter and more reliable techniques," Jain says.

Around that time, the child's condition worsened, and doctors made a concerning find: spots showing that lung tissue was dying. They initiated a combination treatment with several drugs but found themselves lacking a quick, reliable way to see how the bacteria responded. The clinicians ultimately turned to CT (computed tomography) imaging, using a low-radiation, child-friendly adaptation of the technique.

Jain and colleagues performed repeat CT scans over six months to glean quick feedback on the progress of the disease. Each scan delivered a dose comparable to two or three months of natural background radiation from the environment.

"In the absence of reliable biomarkers for pediatric TB, the acute need for rapid readouts of treatment response, and the dangers of treatment failure, we felt a CT scan was our best option," Jain says.

The approach was inspired by Jain and his team's ongoing National Institutes of Health-funded experimental work in animals, using a combination of CT and PET (positron emission tomography) scanning techniques to track TB's behavior in real time.

Child-friendly, low-dose CT scans are becoming increasingly common in medical centers. Jain and his colleagues suggest they should become the norm for pediatric CT imaging, as the current technology can be recalibrated easily and cheaply for that purpose. The researchers also noted in this case, the CT scans defied the clinical dogma that imaging tests lag behind physical symptoms.

Given the remission of the disease and the child's overall good health, the Johns Hopkins team says reactivation of the infection is unlikely. Out of caution, though, they plan to follow the child for another two years or so.

Mycobacterium tuberculosis, the bacterium responsible for TB, is estimated to cause almost 10 million new cases of the disease worldwide each year, with strains impervious to drug therapies rapidly spreading. Experts estimate that a million children develop TB each year, but the real number may be higher due to the difficulty of confirming the diagnosis in a child. 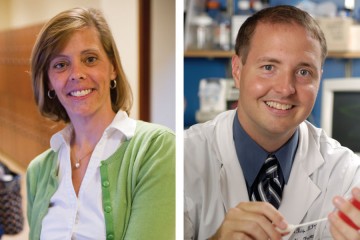