More than 100 Johns Hopkins University students staged a protest on the university's Homewood campus on Friday afternoon, demonstrating solidarity with students protesting racism at the University of Missouri and across the nation, voicing their frustration with racial injustices on their own campus, and demanding an audience with JHU President Ronald J. Daniels.

"Injustice anywhere is a threat to justice everywhere," read another.

The group's primary chant—"It happens at Mizzou! It happens here, too!"—made reference to weeks of student-led protests against racism at Missouri. Since then, students on campuses across the country—from Yale University in New Haven, Connecticut, to Claremont McKenna College in California—have led similar protests of their own.

"We are tired and we are fed up," said junior Tiffany Onyejiaka, vice president of JHU's Black Student Union, which organized and led the protest. "Black students are not treated fairly on this campus. … We want an action plan, not just a discussion."

Added junior Taylor Washington, who took part in the protest: "It's kind of disheartening to look around campus and see people who you really can't relate with. You kind of just feel like an outsider."

Daniels came to Keyser Quad and met with the students for about 20 minutes. He listened as they recited a list of demands—among them, a meeting between students and key university leaders; an increase in the number of full-time black faculty members; recognition of the Center for Africana Studies as an academic department; and accountability for students, faculty, and staff who target black students.

After listening to and receiving a copy of the group's demands, Daniels spoke to them for about 10 minutes.

"I understand, first and foremost … that what you're expressing here today is about Johns Hopkins," Daniels told the group. "It's about our community. It's about who we are. It's about what we value."

Daniels added that he understood that the students were expressing solidarity with campuses across the U.S. and, particularly in light of all that has happened in Baltimore since the death of Freddie Gray, that they are concerned about the disparities between populations in Baltimore.

He also noted that faculty diversity is a topic the university has been actively working to address for more than six months, and that he expected to have an announcement within a few weeks.

"We join cause on a number of things that you've identified," Daniels said. "The issue of 'Why don't my professors look like me?' is a key and urgent challenge for the university."

Daniels and the students agreed to have an open forum on Nov. 30 at 6 p.m. The students asked that Provost Robert C. Lieberman, Kevin Shollenberger, vice provost for student affairs; and Maureen Marsh, secretary of the university's board of trustees also be at the meeting. Daniels added that the deans of the Krieger School of Arts and Sciences and the Whiting School of Engineering should also be a part of this discussion.

"So I now have your list," Daniels said, "and I look forward, with a sense of respect and open-mindedness, to working through the list with representatives of the folks that are here today and others who may want to participate."

The protest disrupted an event in which the president had been scheduled to participate, a filming session on Keyser Quad for the university's annual year-end "Thank You" video. That event was cut short; Daniels acknowledged that hearing the concerns of the student protesters was of far greater importance. 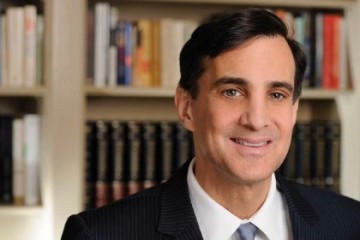 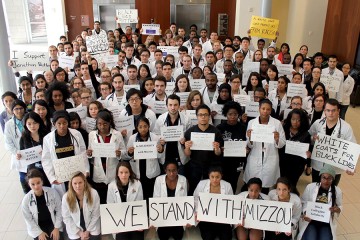 'We stand with Mizzou'