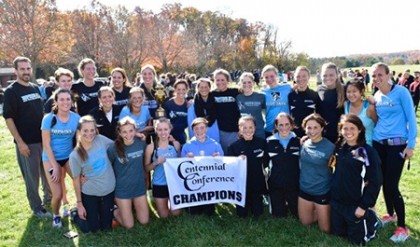 The Blue Jays, winners of the past three NCAA Division III women's cross country championships, claimed the top four spots overall and finished with 19 points, well ahead of runner-up Haverford (69). The margin of victory was the second largest in the meet's history. Complete results

"Tess has great finishing speed and showed it today," JHU coach Bobby Van Allen said. "Her abilty to pick off girls at the end of the race will certainly come in handy as we continue championship season"

Hopkins returns to action on Nov. 14 at the NCAA Mideast Regional Championships hosted by Dickinson College at Big Spring High School in Big Spring, Pennsylvania. The top two teams at that meet earn automatic bids to the NCAA championship meet, which will be held on Nov. 21 in Oshkosh, Wisconsin.

"I think we're in a good position, we will definitely continue to work on tightening our pack," Van Allen said. "It's nice to have such great depth, but we still have work to do and will work to get healthier heading into the regional meet."

Johns Hopkins placed second in the men's meet to earn an automatic bid to regionals. Sophomore Louis Levine paced the Blue Jays, finishing fourth overall on the 8K course in 25:23.